(Editorial note: I was doing so well moving to shorter posts. I fail miserably in achieving that goal here. I went the comprehensive route instead. I promise to return to shorter posts in the future. Buckle up – this is a long ride. I hope you find it’s worth it.)

There is not yet much data available on the President’s CAFE announcement. Luckily, we have a huge base of analysis that the National Highway Traffic Safety Administration (NHTSA) did in 2008 that allows us to infer a lot from what was announced. Here are the specific data points we have from the President’s announcement:

Technically the Administration is today announcing that they will release a new proposed rule. While the news coverage makes it sound like this is a done deal, this is the beginning of a regulatory process, not the end. Still, the starting point is extremely important.

In developing the Bush proposal, NHTSA developed six options. I will show you four of those. Conveniently, what we know about President Obama’s proposal lines up almost perfectly with one of those options. This allows us to use NHTSA analysis of this option to make some initial estimates of the effects of the President’s new proposal. As always, you can click on the graph to see a larger version. 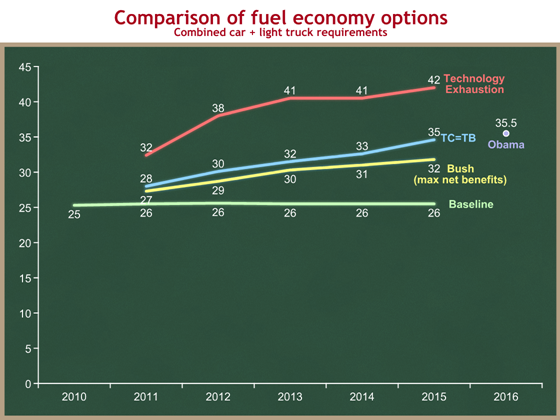 This graph shows the fuel […]