The White House has released a letter from the President to the two Senate Chairmen who are working on (different) versions of health care reform: Senator Kennedy (D-MA), Chairman of the Health, Education, Labor, and Pensions (HELP) Committee, and Senator Max Baucus (D-MT), Chairman of the Senate Finance Committee. The letter is dated yesterday and was delivered as part of a White House meeting between the President and Senate Democratic leaders, including the two Chairmen.

This important letter attempts to shape the pending legislation. It makes new proposals, and it tries to set boundaries to constrain the work of the Chairmen. I am going to walk through the letter and explain what I think it means. I will walk through it in sequence, but will cut out the fluff, and occasionally add emphasis in bold. Each of these quotes could merit a post by itself. I will instead provide a survey of the whole letter. The first notable text is the second paragraph:

Soaring health care costs make our current course unsustainable. It is unsustainable for our families, whose spiraling premiums and out-of-pocket expenses are pushing them into bankruptcy and forcing them to go without the checkups and prescriptions they need. It is unsustainable for businesses, forcing more and more of them to choose between keeping their doors open or covering their workers. And the ever-increasing cost of Medicare and Medicaid are among the main drivers of enormous budget deficits that are threatening our economic future.

This is fantastic, especially as 2. He is focusing on health cost growth as the underlying problem, rather than just focusing on the uninsured, which is only one symptom of the problem. I wrote about this in mid-April: By focusing only on covering the uninsured, are we solving the wrong problem? Here’s the key picture from that post. We need to focus on the red box, and not just the blue box. 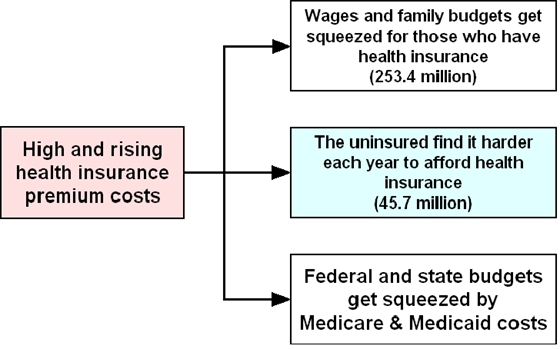 We simply cannot afford to postpone health care reform any longer. This recognition has led an unprecedented coalition to emerge on behalf of reform — hospitals, physicians, and health insurers, labor and business, Democrats and Republicans. These groups, adversaries in past efforts, are now standing as partners on the same side of this debate.

There is a less noble explanation for the existence of this coalition. I wrote in mid-May, “[The […]