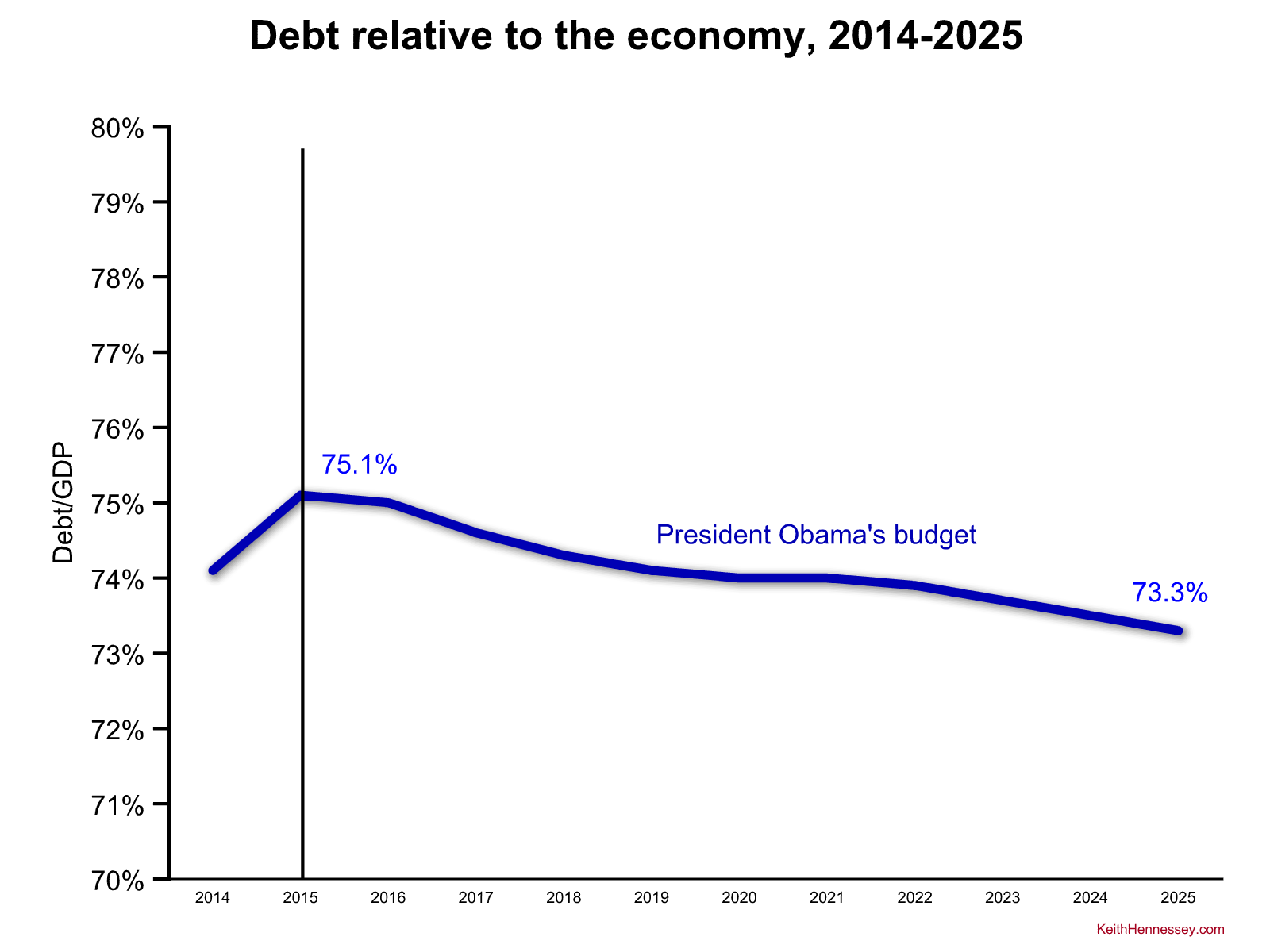 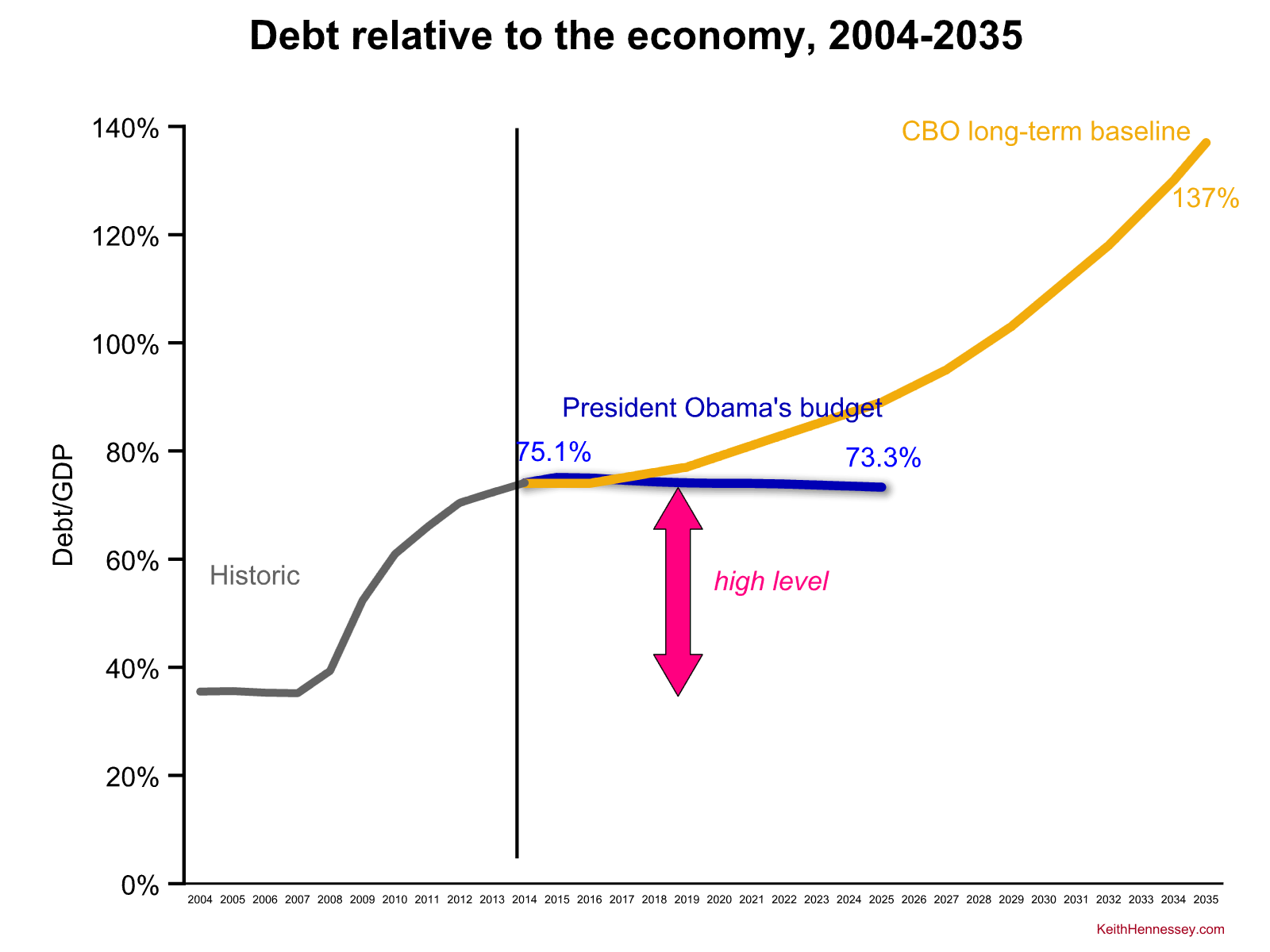 Now you see why I said “at a high level.” Under both a current policy baseline and the President’s budget, debt/GDP is in the mid-70s for the next five years, more than twice as large a share of the economy as it was pre-financial crisis. (The same is true if we go back even farther in time. The pre-crisis average debt/GDP varies between 34 and 40% of GDP for any start year from 1965 through 2007.) While the long-term baseline starts to climb about five years from now, the President proposes to keep it roughly flat through the next decade.

Let’s see what a “real” declining debt/GDP path looks like. I am going to add what Messrs. Bowles & Simpson proposed in 2010. 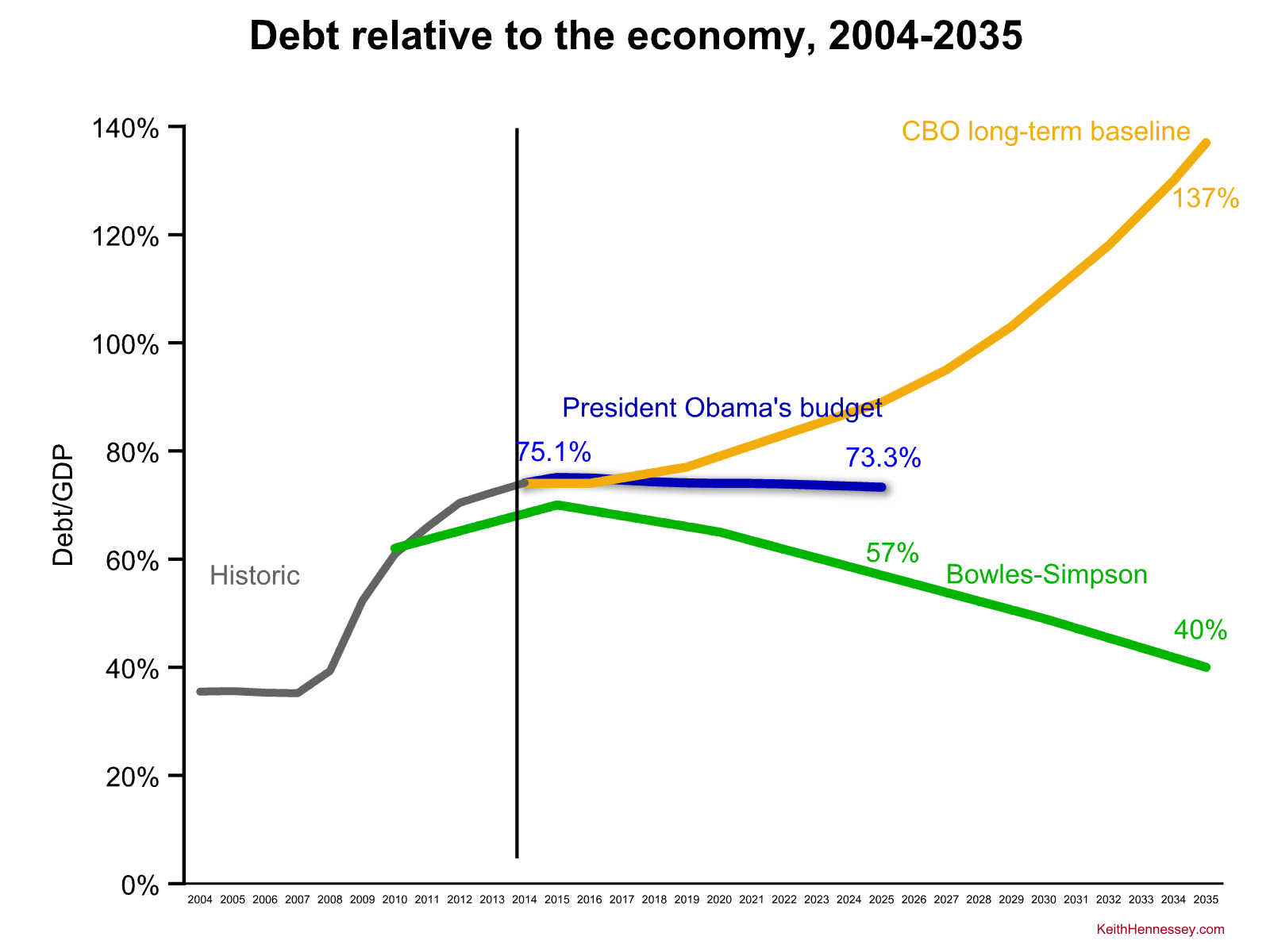 Now you can see why I use “stabilize” and “flat” to refer to the President’s proposed debt/GDP path. Technically both President Obama and Bowles-Simpson propose declining debt/GDP paths, and it’s just a difference of degree. But the difference is so quantitatively significant that they are fundamentally different proposals, representing different underlying premises about what is the preferred path of future government borrowing. Arithmetically, the President’s proposal would reduce debt/GDP by two-tenths of a percentage point per year. That’s basically a rounding error.

Bowles & Simpson said that debt/GDP in the 70s is too high, and that significant policy changes should be implemented to bring debt back down to its historic share of the economy. They proposed specific policies to back up this proposed debt path.

That yellow line should terrify you. What’s even scarier is that I think the President’s blue line would start growing in parallel with the yellow line after ten years. He has not specified what he would do to keep the blue line flat beyond 10 years, so I can’t prove it. But as best I can tell, in addition to choosing not to reduce debt from its current high level, President Obama has no answer for how to continue to hold debt/GDP stable in the long run when entitlement spending pressures keep pushing it up.

The key question provoked by the blue and green lines is therefore “Is stabilizing debt/GDP in the 70s OK? Or should policymakers cut spending and/or increase taxes to put debt on an aggressively declining path relative to the economy?”

For five years President Obama and his team have argued that aggressive deficit reduction would jeopardize the recovery. This was always a red herring argument, because nothing precluded policymakers from immediately enacting into law deficit reduction that would not have taken effect until after the recovery was well underway. Team Obama misdirected the public debate by conflating the date of enactment with the dates of first implementation and effect.

But never mind that now. The recovery appears well underway and the “stimulus vs. austerity” false choice is receding into the past. Although the President’s proposed debt/GDP is similar to that which he has proposed in his last four budgets, it takes on a different meaning today. With the weak economy excuse behind him, this year President Obama is choosing not to take advantage of a recovering economy to begin repairing the federal government’s fiscal balance sheet. He seems to think debt/GDP is OK where it is now, or at a minimum that he’d rather use his proposed higher taxes to offset new spending increases rather than to pay down debt.

Some on the left argue that there is nothing magic about debt/GDP in the mid 70s, that the U.S. government can borrow much more without risking investors losing confidence and triggering a new kind of financial crisis. That’s a judgment call that can be neither proven nor disproven, but let’s set that debate aside for the moment. There are other costs to high government debt.

OK, who else wants to reduce debt/GDP dramatically from where it is now? House Republicans. Here is what they proposed in the budget resolution they passed last year.

Let’s not get too carried away in precise comparisons of the red and green lines. They were done four years apart from different baselines, so it’s not fair to say that House Rs would reduce debt/GDP faster than Bowles-Simpson, or to precisely compare the percentages shown on the graph. Instead, you should conclude that House Republicans (last year) and Bowles-Simpson (in 2010) expressed the same rough policy preference about present-vs-future: both groups said that stabilizing debt/GDP in the 70s was insufficient, and both groups proposed significant fiscal policy changes to dramatically change the path of future debt, to bring it down over time to its historic share of the economy.

I know that many left-of-center folks also (a) hate the House Republicans’ proposed spending cuts; and/or (b) think they are absurdly unrealistic. In my view both are critiques of the particular path chosen by House Rs, not their choice of a debt goal. Given the option I would hit the shared Bowles-Simpson-House Republican debt path with a package of fiscal policy changes different from either of their proposals.

But the centrists and the House Republicans at least share a common judgment about how much government borrowing is too much, and a common goal for how rapidly to reduce that future borrowing. Both propose to radically change the path of future borrowing relative to current policy. And President Obama’s debt goal is fundamentally different from the shared debt goal of the centrists and House Republicans. Agreement on a debt goal is a necessary (but not sufficient) precondition for reaching a significant fiscal policy agreement, and the debt goal gap between President Obama and the centrists is a fundamental problem.

In effect there are four possible paths:

3A. the Bowles-Simpson path to rapidly and sharply reduce debt/GDP to historic levels through a mix of higher taxes and spending cuts; and

3B. the House Republican (2014) path to rapidly and sharply reduce debt/GDP to historic levels almost entirely through spending cuts.

Elected Democrats who plan to be making policy after President Obama leaves office need to decide whether they are for the blue or the green debt line. If they hate the entitlement spending cuts proposed by Bowles and Simpson, they need to decide whether they will propose other policies (tax increases, mostly) to reduce debt/GDP to match the centrist/House R debt path. Or are future Democratic leaders going to agree with President Obama that debt/GDP is OK where it is now, that it does not need to be reduced from the 70s?

This is therefore not a decision for President Obama. He haalready made his choice. It is instead a decision for any remaining moderate Democrats in Congress: Are you going to plot a third way, a path that agrees with Republicans on reducing debt but disagrees with them on how to do it? Or are you going to use your minority party status as an excuse to duck saying what you’re for and let Sen. Bernie Sanders, President Obama, and Sen. Elizabeth Warren represent your views as being the party of high and ever-increasing debt?

Here’s what I think happens if future Democratic policymakers allow President Obama’s goal of stabilizing debt in the short term rather than reducing it to become the unified position of the entire Democratic party.

None of these moderate fiscal Democrats are in power today and I see no successors. The Democratic party’s fiscal policy shift away from debt reduction results from a combination of (1) the retirement of these moderates, (2) the rise of the progressive base and its strong new leaders, and (3) President Obama’s rejection of the Democratic moderates’ traditional debt reduction goal.

Will the last remaining moderate fiscal Democrat in Washington please turn out the lights?

Data sources and further detail on the charts are here.