In this post I’m just going to compare the short-term deficit and debt effects of the two proposals. While I’d like to use comparable numbers, CBO has not yet rescored President Obama’s proposal because the President released his budget six weeks late. So for now I’ll compare Ryan’s numbers to Obama’s. That is suboptimal but the best we can do for now, and I am confident it doesn’t change the overall picture. Let’s start with deficits. 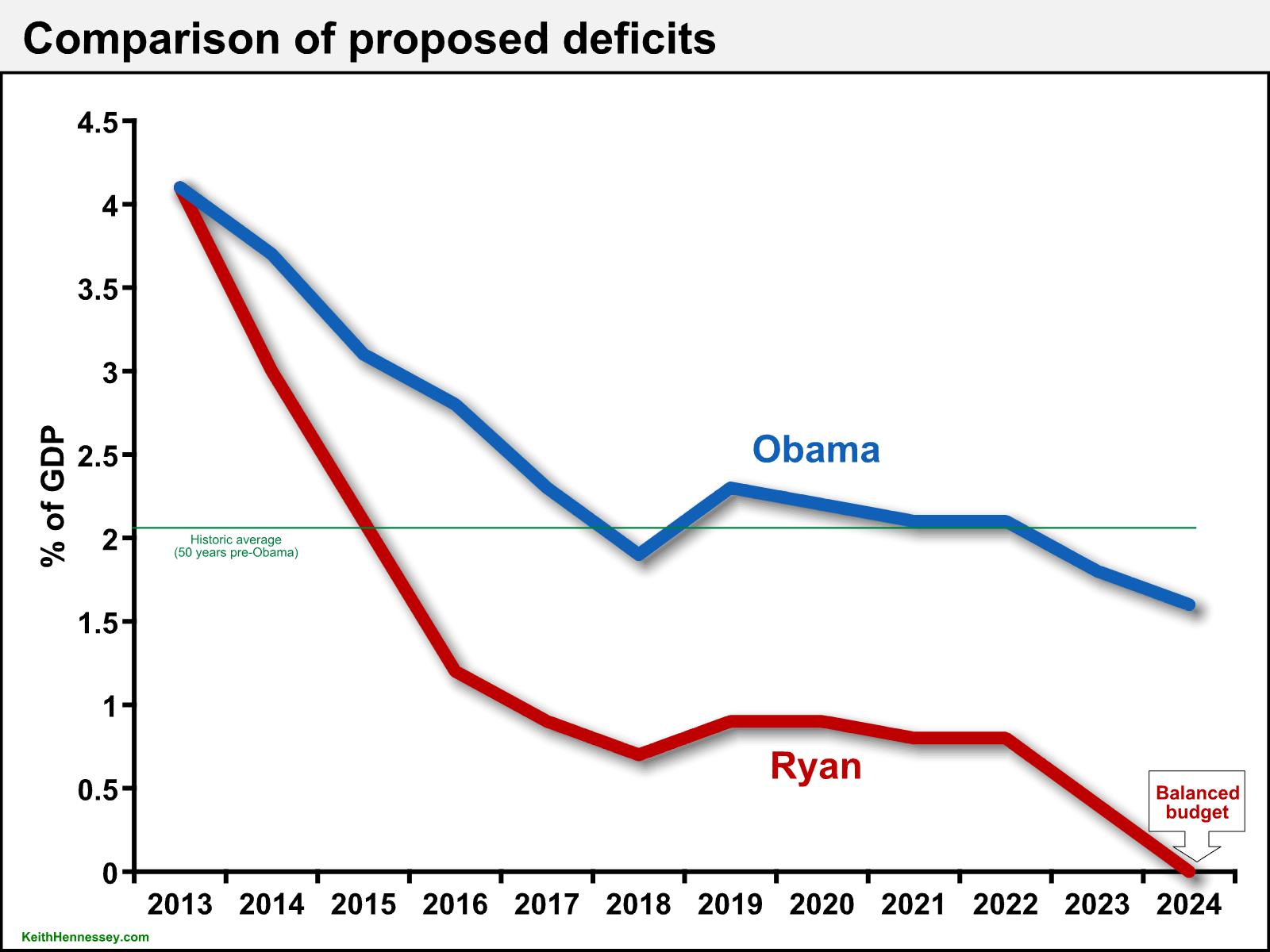 A few things jump out.

The most politically potent aspect is balance vs. no balance.

Now let’s compare the short-term debt effects of the Ryan and Obama budgets. Debt held by the public is (sort of) the accumulation of past deficits and a few surpluses. 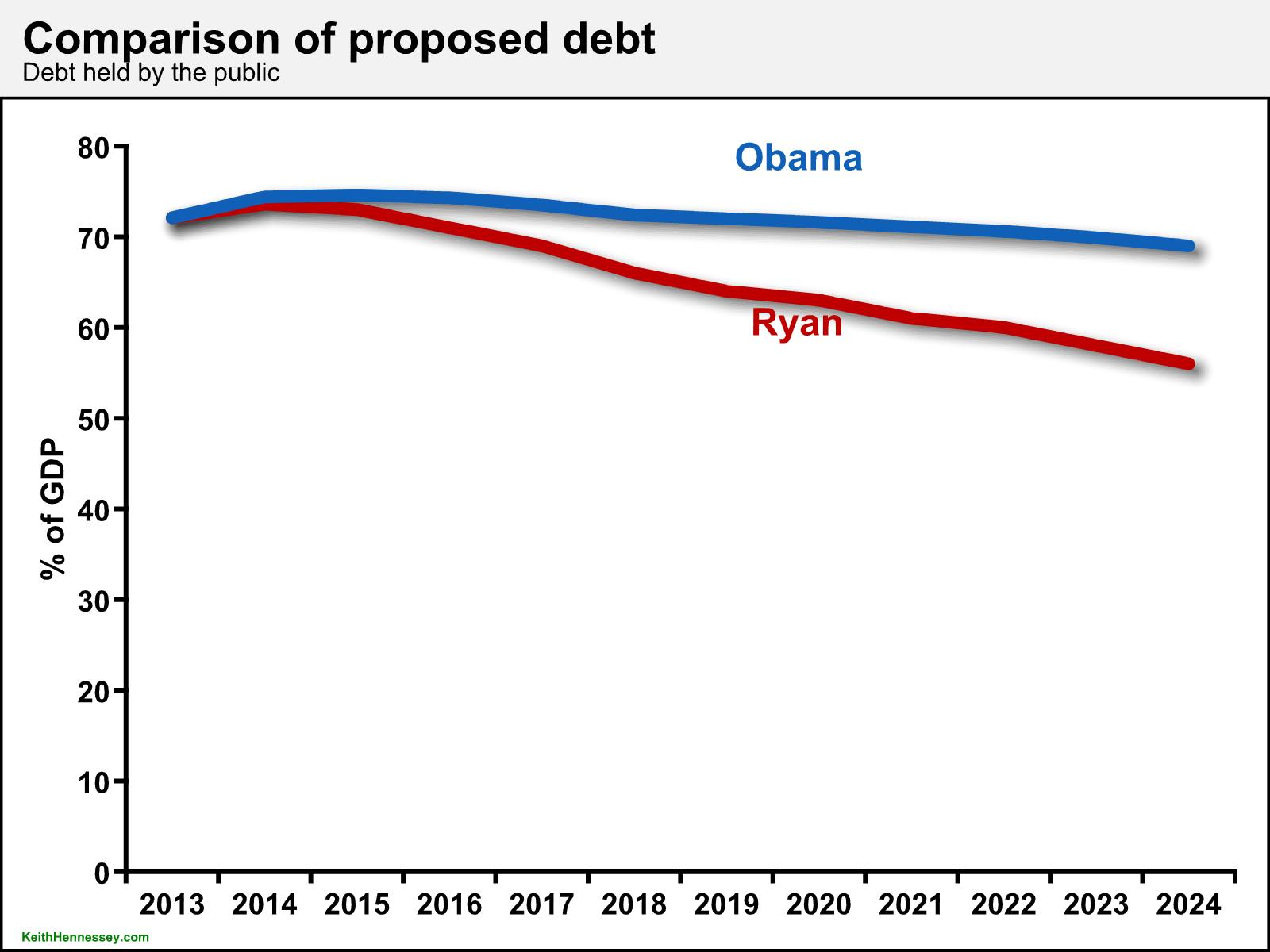 The notable points here are (1) the growing gap over time and (2) the President’s decision to reduce debt/GDP over time, albeit slowly. In past years he was content to stabilize debt/GDP in the short run.

At first glance the Obama and Ryan budgets appear quite similar to what each proposed last year. Because the downward slope is so gentle, President Obama’s declining debt/GDP path is more significant politically than as a policy matter. It allows him to say his budget would reduce debt over time, at least in the short run. He couldn’t say that last year.

In this midterm election year, Chairman Ryan has offered House Republicans a tremendous political advantage: BALANCE. This reminds me of 2011.

This debate is somewhat silly, as the principal fiscal policy difference between the two parties has usually been more about the size of government than about which party wants to borrow less from the future. Nevertheless, the political effects of deficit/debt comparisons are significant.

In 2011 President Obama proposed his budget in February. Chairman Ryan then proposed a budget with a significantly more aggressive deficit and debt reduction path, thus seizing the political advantage in this partisan competition. The numbers clearly showed that (House) Republicans were for much lower deficits and debt than the President.

And then the President modified his budget in April, proposing significantly lower deficits than he did two months prior. He purported to match the deficit reduction in the Ryan budget–this was a lie, but he claimed it. (See Bob Woodward’s book for details on both the internal process and the lie.) What’s significant today is that in 2011 President Obama reacted to the political weakness he then faced by being for higher deficits and debt than House Republicans. He proposed more policy changes, some of which involved more political pain, just so the could claim to match House Republicans on deficits and debt.

Chairman Ryan has teed up a significant political tool for House Republicans: they can be for a balanced budget, in contrast both to President Obama’s higher deficits and debt and to the Senate Democrats’ lack of a budget.

This is a potent weapon for the mid-term election battle. Congressional Republicans can be not just opposed to something unpopular (Obamacare, of course), but for something popular. They can expand their topline economic message to have three legs rather than just one.