Each year the federal budget cycle begins with release of the baseline from the Congressional Budget Office in a document titled The Economic and Budget Outlook. If you want to learn more about economic and fiscal policy I recommend you read carefully at least CBO’s short summary.

My former White House colleague Charles Blahous wrote a great piece that highlighted ten fiscal policy lessons you should draw from CBO’s latest baseline report. With this post I’d like to look at one important macroeconomic graph from that same report. 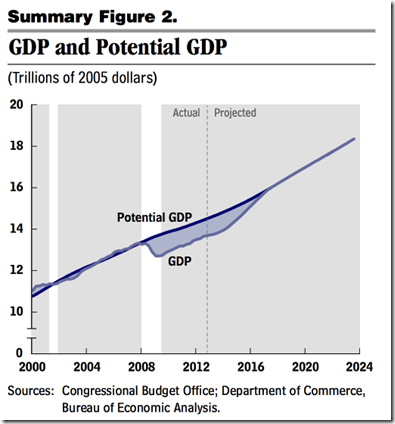 This graph compares actual GDP with what GDP would be “if everyone were working,” a rough description of what the economists call potential GDP. They estimate the lowest unemployment rate that they think would be consistent with inflation not accelerating. CBO thinks this number is 5.5%. They then estimate what economic output would be if we were at 5.5% unemployment rather than where we are, which is now 7.9%.

The gap between the light blue (actual GDP) and dark blue (potential GDP) lines above therefore represents an estimate of the output lost due to high unemployment. To the left of the dotted line that output gap is in the past and cannot be recovered. To the right of the dotted line we see CBO’s projections for actual and potential GDP in the future. We want actual GDP to converge with potential GDP, to “close the gap” quickly.

Now let’s zoom out and look at a similar historical graph measured in decades rather than years. 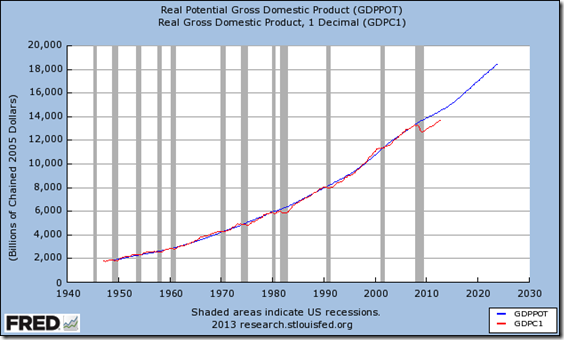 From this graph we can see that in the long run, actual GDP tracks closely with potential GDP, and that the recent output gap is quite large in comparison.

Let’s zoom back in and examine the recent past, the left half of CBO’s graph. 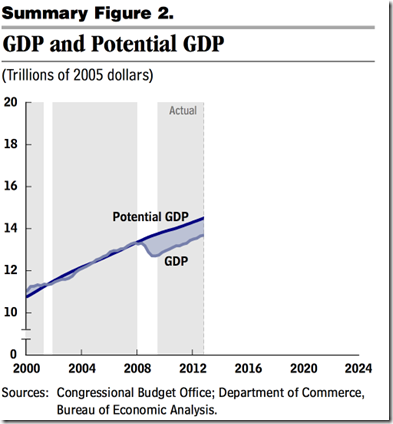 The downward sloping part of the light blue line is the recent recession, also marked by the vertical white stripe. If you look closely you can see actual GDP flattening out in early 2008 as potential GDP continues to rise. Actual GDP then plummets as the financial shock hits in the second half of that year. The recession ended and the recovery began where the line started sloping upward in mid 2009.

In trying to frame this story positively President Obama draws your attention to the fairly steady growth of actual (real) GDP since the recession ended, the upward slope of the light blue line from mid 2009. This graph also shows that in recent years actual GDP had been growing at roughly the same rate as potential GDP. Because the light blue and dark blue lines have almost the the same slope, the distance between them is almost as large now as it was when the recession ended. So while the President is right that the economy has been growing for 3+ years, the output gap is almost the same size as it was in mid 2009. We’re not catching up.

Here is how CBO describes it.

By CBO’s estimates, in the fourth quarter of 2012, real GDP was about 5½ percent below its potential level. That gap was only modestly smaller than the gap between actual and potential GDP that existed at the end of the recession because the growth of output since then has been only slightly greater than the growth of potential output.

To close the output gap we need much faster short-term economic growth than we have had over the past three and a half years. We need the light blue line to slope sharply upwards until it meets up with the dark blue line.

Now let’s turn to CBO’s projection for the future. I’ll hide the left half of the graph this time. 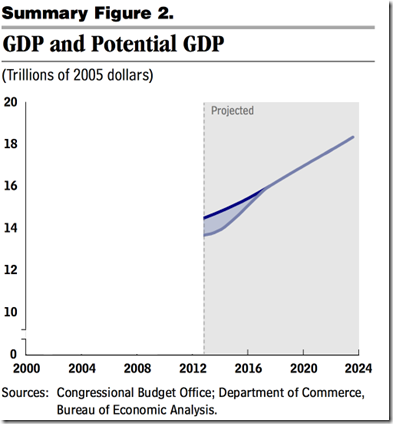 CBO also estimated the total size of the output gap and it’s depressing:

With such a large gap between actual and potential GDP persisting for so long, CBO projects that the total loss of output, relative to the economy’s potential, between 2007 and 2017 will be equivalent to nearly half of the output that the United States produced last year.

You may have noticed that I have avoided discussion (here) of why the economy has grown so slowly, how much of that is because of or in spite of policy decisions, and why it’s projected to continue to do so for the next year. That’s where the food fight begins, including the debate about whether and how much the 2009 fiscal stimulus increased growth, and the debate about how much of slow future growth is because of business uncertainty about the economy, about drags from policy and regulation, and about allowing more time for balance sheet repair after the financial shock of 2008.

Those are incredibly important debates but today I just want to highlight the basic historic facts and a mainstream projection from an unbiased source. On our current policy path CBO projects continued slow growth for 2013 and a gradual acceleration after that, returning the U.S. economy to full capacity output by the end of 2017. That projection excludes: