Is private sector employment fine in absolute or relative terms?

President Obama’s argument last Friday that “the private sector is doing fine” caused quite a flap.  He made two arguments:

His opening remarks emphasize absolute job growth in the private sector.  Note “our businesses have created” in the following quote.

THE PRESIDENT:  After losing jobs for 25 months in a row, our businesses have now created jobs for 27 months in a row — 4.3 million new jobs in all.  The fact is job growth in this recovery has been stronger than in the one following the last recession a decade ago.  But the hole we have to fill is much deeper and the global aftershocks are much greater.  That’s why we’ve got to keep on pressing with actions that further strengthen the economy.

As you would expect from any President he is highlighting the positive: both the change in level (+4.3 M jobs) and the trend line (created net jobs for 27 months in a row). These are prepared remarks, so we know he intended to make these points.

Here is the second quote, the one that is causing controversy.

THE PRESIDENT:  The truth of the matter is that, as I said, we’ve created 4.3 million jobs over the last 27 months, over 800,000 just this year alone.  The private sector is doing fine. Where we’re seeing weaknesses in our economy have to do with state and local government — oftentimes, cuts initiated by governors or mayors who are not getting the kind of help that they have in the past from the federal government and who don’t have the same kind of flexibility as the federal government in dealing with fewer revenues coming in.

And so, if Republicans want to be helpful, if they really want to move forward and put people back to work, what they should be thinking about is, how do we help state and local governments and how do we help the construction industry.

In a future post or two I’ll look at the why behind the President’s logic. In this post I just want to focus on the what, the basic facts of the case.

Let’s take the President’s claim seriously. What would lead him to claim that (1) the private sector is doing fine, and (2) the problem is in government employment rather than private employment, thus necessitating his policies of increased federal spending to create more government jobs?

I think you will see that there are facts that support the President’s arguments, but only if you choose one particular timeframe.

First let’s look at the claim that private sector employment is fine in an absolute sense.  Rather than making my argument in text surrounding the graph, my core arguments are on the following three graphs, so please study them carefully. You can click on any graph to see a larger version. 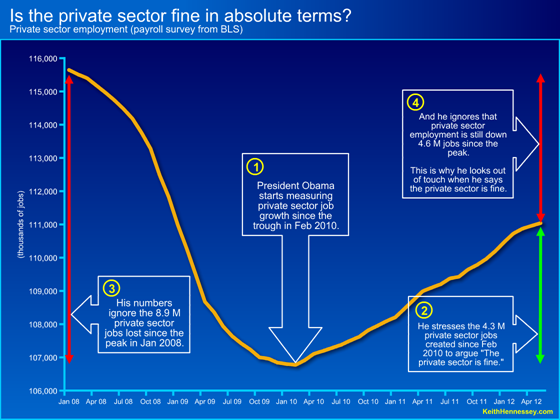 President Obama is focusing on changes since employment bottomed in February 2010 – we know that from his “past 27 months language,” as well as his measure of the change since then (+4.3 M private sector job). I’m calling February 2010 the employment trough.

There is nothing wrong with focusing on the positive, and it’s to be expected when you’re running for office. If, however, it leads you or those listening to you to incorrect policy conclusions, then it can be quite dangerous.

Which number is the right way to think about private sector employment?  Is it the +4.3 M jobs created since February 2010? Is it the 4.6 M fewer jobs that exist then when we were at peak employment in January 2008? The right answer is “both and neither.” There is no single right way to think about the change in employment. It is important that we see as full a picture as possible, and the President is showing us only part of the picture, the upward sloping portion of the above graph. 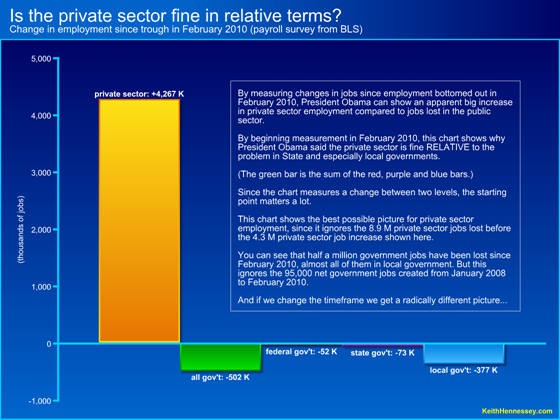 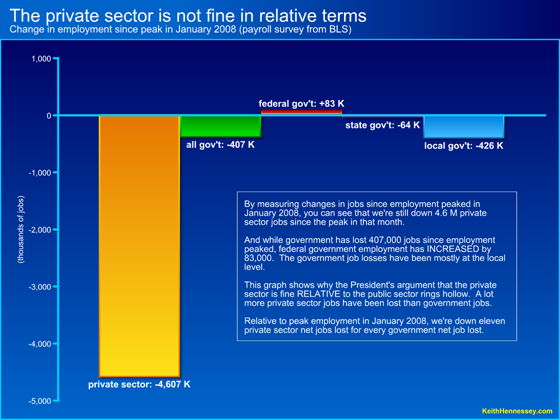 That’s the opposite story from the one told by the President. While the U.S. economy has been slowly creating private sector jobs over the past 2 1/4 years, the hole left to fill is overwhelmingly one caused by the destruction of private sector jobs.

The President is right that the public sector is not creating net new jobs because of local layoffs.  But by focusing on recent trends and ignoring the nearly nine million private jobs lost before his measurement window began, he is leading us to the wrong conclusion. Even if government job growth were to resume, our economy needs to create millions more private sector jobs to be restored to full health.

My charts understate the size of the employment gap because they only measure the decline from January 2008. To return to full employment we need to account for population growth since January 2008, so we need more than 4.6 M new private jobs.

The private sector is not fine, in absolute or relative terms.