Almost every time President Obama talks about energy he mentions wind and solar power. He used to talk about nuclear power as well. Doing so was politically courageous for a Democrat because nuclear power splits the environmental left. The President rarely mentions nuclear power these days, I presume because of the Fukushima earthquake + nuclear incident a year ago.

Doubling Renewable Energy Generation: Thanks in part to the Obama Administration’s investment in clean energy – the largest in American history – the United States has nearly doubled renewable energy generation from wind, solar, and geothermal sources since 2008.

“Nearly doubled” in less than four years sounds pretty good but reminds me of this Dilbert cartoon.  In it Dilbert raises his hand and asks the marketing manager:

Are you asking a room full of engineers to be excited about a big percentage increase over a trivial base?

Let’s look at my favorite energy graph, produced by Lawrence Livermore National Laboratory, a part of the Department of Energy.  It translates all energy usage into a common unit (BTUs) for comparison.  You’ll probably want to click on the graph to see a larger (and readable) version.  In particular look at the size of the solar (yellow), wind (purple), and geothermal (brown) connecting lines, especially in comparison to the lines for nuclear (red), coal (black), and natural gas (light blue). 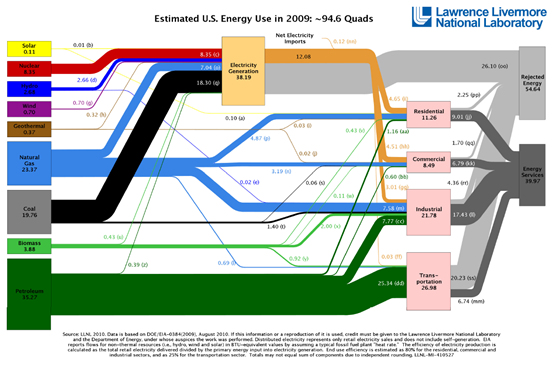 Wind, solar, and geothermal sources are trivially small sources of U.S. energy.  Doubling their usage is significant within those industries but when compared to the overall pattern of energy usage in the U.S., the increases are tiny.

Here are three basic facts to know about energy sources for electricity production in the U.S.:

Don’t forget two points from yesterday’s post which you can see easily from the above graph: 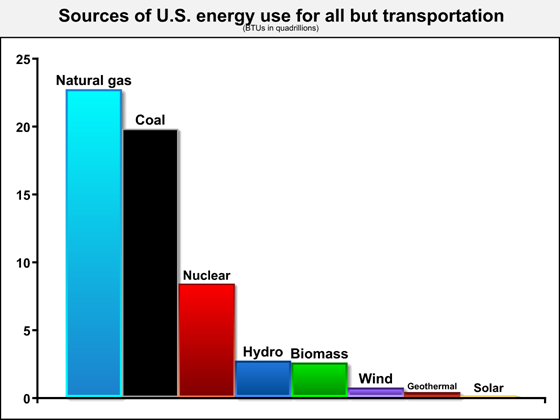 From this graph you can see how small wind and solar power are relative to other energy sources in the U.S.  Even large percentage increases in the use of solar and wind power will have trivial impacts on the patterns of American energy usage.  Doubling, tripling, or quadrupling our usage of these technologies will not fundamentally change the three above basic facts about electricity production in the U.S.  Until there is a technology breakthrough, the U.S. is a land of electricity production from coal, natural gas, and nuclear, with hydro and biomass trailing and with wind, geothermal, and solar too small to matter much at all.

The value of increased solar and wind production is not the marginal short-term reductions of coal and natural gas we use in America.  These increments are too small to matter. The benefit is instead whatever we learn about producing and using these technologies that might, at some point in the future, result in innovations that so significantly reduce the cost of these technologies that it becomes less expensive to produce power from these renewable sources than it does with our abundant supplies of coal and natural gas.  If the technology ever crosses (or even approaches) those breakeven thresholds, then these energy sources will rapidly and significantly alter the shape of the U.S. energy picture.

Until then the President has a rhetorical point that sounds good but matters little to how we use and produce energy in the U.S.