Looking at the Senate spending votes

Yesterday the Senate voted on competing proposals for discretionary spending for the remaining seven months of Fiscal Year 2011.

Each proposal needed 60 votes to succeed.  Both failed to get even a majority. 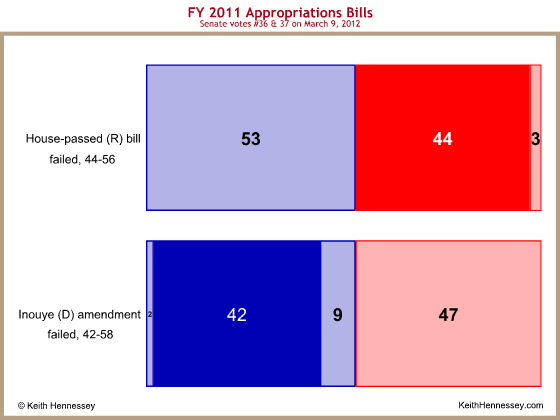 It is politically significant that, in a 53-47 Democratic Senate, the House-passed bill garnered more votes than the Senate Democratic alternative.  That is a bad outcome for the Senate majority party.

On the House-passed bill, I have positioned the three no votes on the far right.  It is clear that Republican Senators DeMint (SC), Lee (UT), and Paul (KY) voted no because they want even less spending than in H.R. 1, or at least to signal that they don’t want spending to increase above H.R. 1.  On this issue the three of them are the right flank in the Senate

With the exception of those three, the vote on H.R. 1 was straight party line.  I am pleasantly surprised that Republican moderates supported H.R. 1.  House and Senate Republicans are at the moment united.

The Democratic alternative was an implementation of the President’s proposal.  All 47 Republicans voted no, while Democrats split into three camps.

The bulk of the Democratic caucus, 42 members, supported Inouye.

Senators Levin (MI) and Sanders (I-VT) voted no on the left.  I presume they thought the cuts in Inouye were too deep, or at least they were casting a symbolic vote that they didn’t want cuts to go deeper.

The above pictures shows a stalemate.  Without a deal between the leaders, each would struggle to get a simple majority, never mind the 60 votes needed for a victory.  This may explain Senator McConnell’s quote this morning:

We’re waiting for the president of the United States.  He is the most prominent Democrat in America — only his signature can make something a law. Now is the time to engage, and he has been curiously passive up to this point.

So far Senate Republicans are standing firm with their House colleagues, and Senate Democrats are splitting quite significantly.  And while the Senate floor is, at the moment, the battleground, this is not just a Senate game.  A hypothetical Senate deal could easily fail in the more partisan House, where both the average and marginal Republican votes are farther right.  Since the Speaker unilaterally controls whether a bill can be considered on the House floor, the President and his team must gain Speaker Boehner’s support for any deal.