The negotiations on the continuing resolution (CR) began yesterday.  The Administration’s new line, echoed by Congressional Democrats, is that their new offer “comes halfway.”

As the players jockey for position they will be throwing out all kinds of confusing numbers. The confusion arises from two factors:

We can eliminate most of this confusion by focusing on proposed spending levels rather than the proposed changes in those levels.

Yesterday President Obama’s new NEC Director, Gene Sperling, presented the Administration’s perspective on the negotiations.  It’s clear the mantra is “With this proposal we have come halfway.”  I expect the President will start saying this soon.

My administration has already put forward specific cuts that meet congressional Republicans halfway.  And I’m prepared to do more.

This is called anchoring – trying to frame the negotiations quantitatively to make your own position seem reasonable, and your negotiating partner’s position seem less reasonable.  It appears that neither Congressional Republicans nor the press are buying the Administration’s anchoring.

Here is how the Administration justifies the claim that they have “come halfway” with their new proposal.  As always, you can click on any graph to see a larger version. 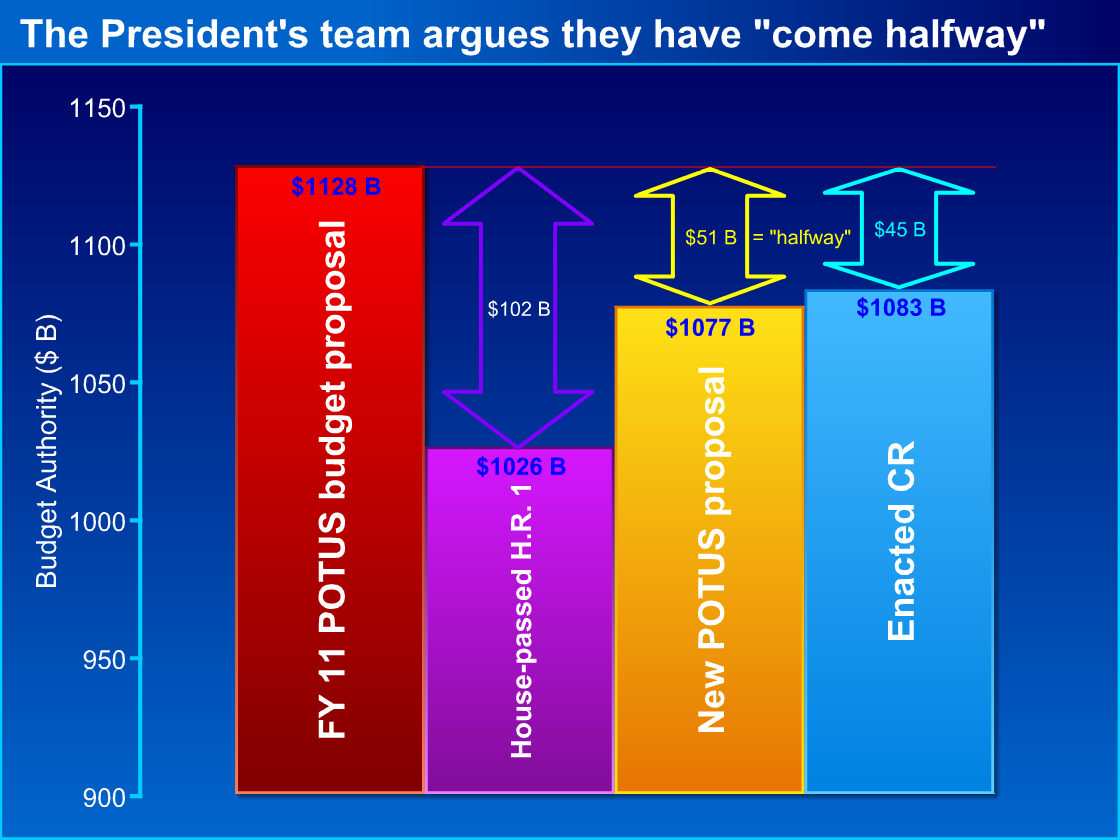 The principal problem with this presentation is that the President chose the height of the red bar.  Everyone understands this is therefore an arbitrary basis for comparison.  Had the President instead initially proposed $1,230 B (a number I made up by adding another $102 B to the $1,128 B shown here), he could then have described his new yellow bar as “coming three-fourths of the way.”

Democrats are struggling to convince the press that the red bar is a meaningful starting point.  They correctly point out that, last fall, when selling their “cut spending by $100 B” campaign platform, Congressional Republicans used the red bar for comparison.  That was a mistake when Republicans did it last fall.  In recent days Republicans have admitted this mistake and are now attacking the red bar and the Administration’s “halfway” claim.

Team Obama is savvy enough to understand that they won’t convince any Republicans with this argument.  They are instead trying to frame the public debate.  I expect this tactic to fail within the negotiating room and mostly fail outside it.

There are other issues with that $1,128 B figure that the Administration says represents the basis for comparison.  You don’t have to worry about these details, but I include them for completeness, and to further demonstrate how shaky it is to compare other levels to the red bar.

Now let’s look at a different way to frame it. 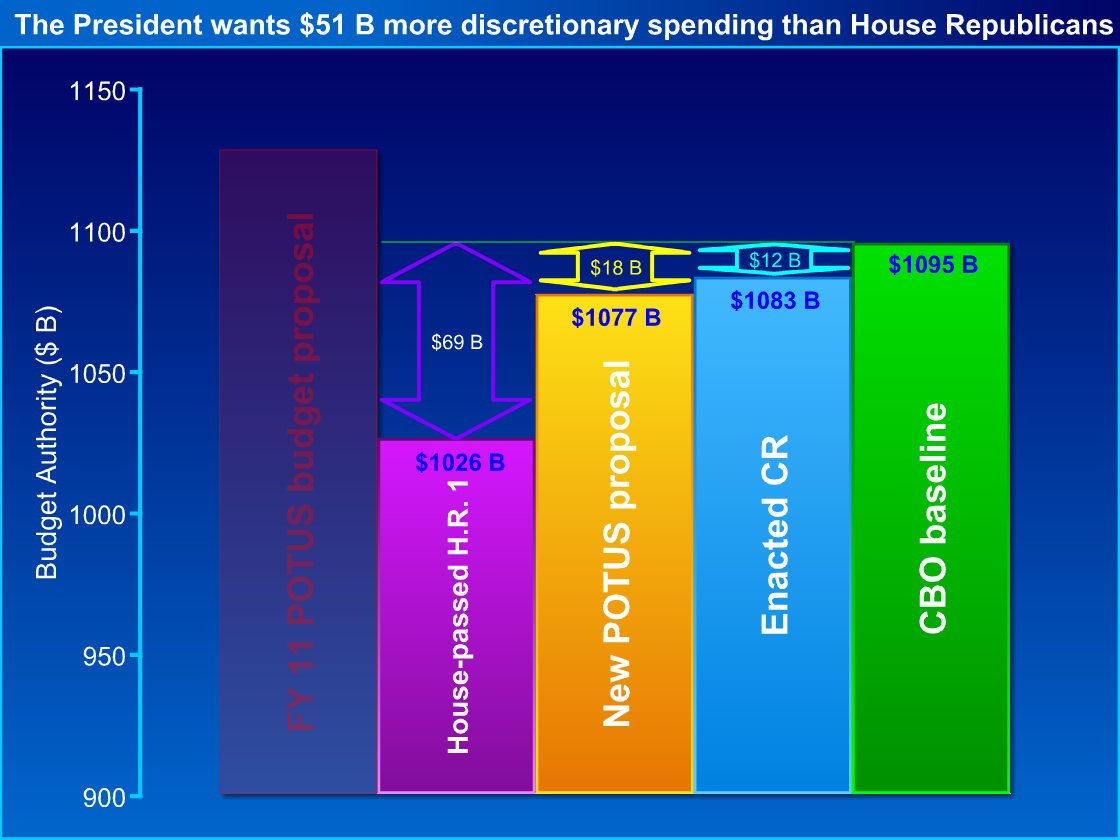 I have faded the (misleading, in my view) President’s red bar so that we can ignore it here.  I added a new green bar, showing what would be spent if Congress just did a straight extension of last year.

The selection of endpoints for calculating the “gap” and how far one side has “moved” is ultimately a judgment call and at least somewhat arbitrary. I don’t blame the Administration for choosing a high bar to make themselves appear reasonable.  I do blame any reporters who unquestionably report the statement “we’ve come halfway” as fact.

I am for the lowest possible spending – I’d be happy to support the purple bar or even lower.  But rather than argue what the spending should be or how the debate should be framed, I’ll offer my prediction of what the final result will be. 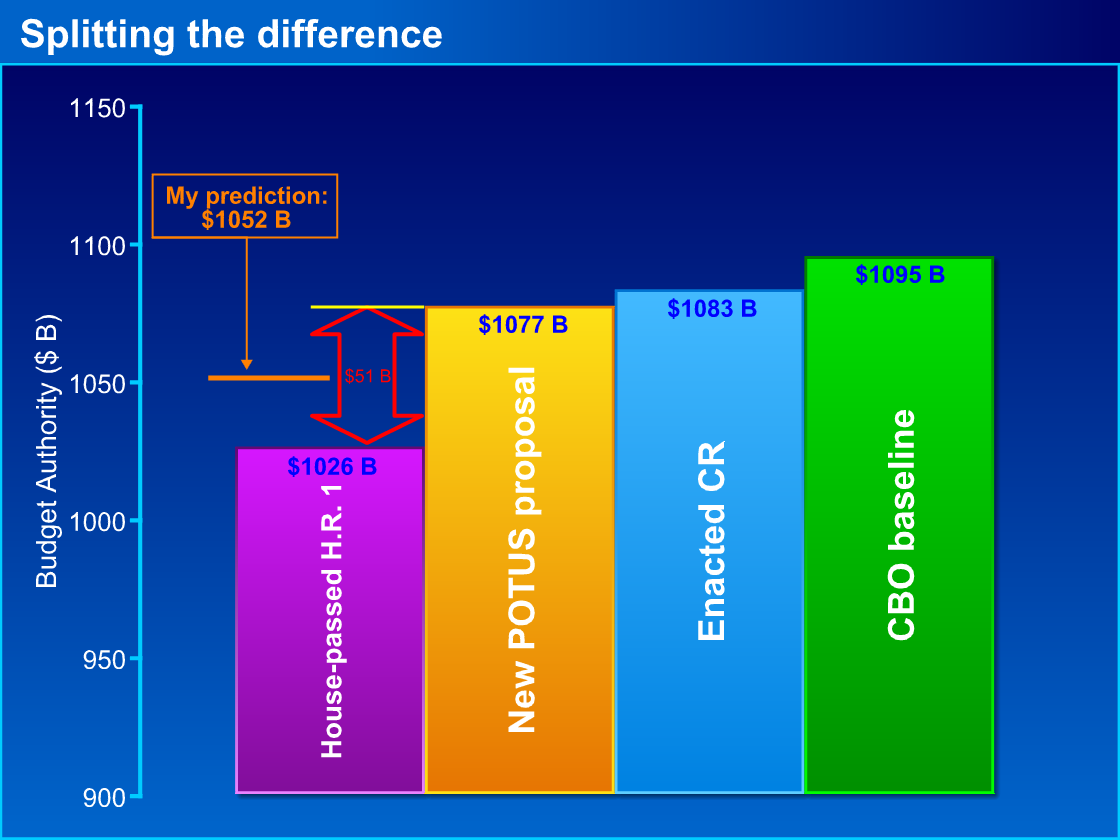 I predict a final enacted (non-emergency) discretionary spending level of $1,052 B, halfway between the House-passed H.R. 1 and the President’s new proposal.  I base this prediction on where I am guessing the votes are, rather than on either side’s intellectual justifications or public framing of the negotiation.

My logic is simple.  The House has already passed the purple bar but cannot get that level through a Democratic-majority Senate.  I think Senate Democrats will show next week that they have a majority to pass the President’s new yellow bar proposal, but will be unable to get 60 votes to overcome a Republican filibuster and, even if they could, would be blocked by the House.  In both cases I see the President as backing up the Senate Democratic legislative strength, but his veto is really a fallback rather than the primary line of defense for the side that wants to spend more.

I am making a judgment that this is rough parity in terms of legislative strength.  I assume both sides are equally obstinate/principled and equally skilled at negotiations, even though Democrats have repeatedly fumbled the ball over the past few weeks.  I then predict the midpoint of those two equal-strength positions as the final outcome.  That’s the midpoint of $1,026 B and $1,077 B, or $1051.5 B.  Round up because appropriators control the paper.

It may be asking too much to imagine either side getting to this level in the next two weeks, so I won’t necessarily predict that this outcome will be achieved before the current CR expires.