This post is named after the Discovery Channel’s upcoming Shark Week.

THE PRESIDENT: But even as we work to jumpstart job growth in the private sector, even as we work to get businesses hiring again, we also have another responsibility: to offer emergency assistance to people who desperately need it — to Americans who’ve been laid off in this recession.

In this context the word emergency has a technical meaning. It means “you don’t have to pay for it with offsetting spending cuts or tax increases.” I think it makes sense to extend unemployment insurance benefits now, but it is neither sudden nor unforeseen and therefore not an emergency. The $35 B deficit increase of the unemployment insurance benefits in the Reid amendment should be offset with spending cuts starting two or more years from now.

THE PRESIDENT: And I have to say, after years of championing policies that turned a record surplus into a massive deficit, the same people who didn’t have any problem spending hundreds of billions of dollars on tax breaks for the wealthiest Americans are now saying we shouldn�t offer relief to middle-class Americans like Jim or Leslie or Denise, who really need help.

It is incorrect to say “these people,” by whom the President means Congressional Republicans, “are now saying we shouldn’t offer relief to middle-class Americans.” Just yesterday Senate Minority Leader Mitch McConnell said on CNN’s State of the Union:

LEADER MCCONNELL: Well, the budget is over a trillion dollars, too, and somewhere in the course of spending a trillion dollars, we ought to be able to find enough to pay for a program for the unemployed. We’re — we’re all for extending unemployment insurance. The question is when are we going to get serious, Candy, about the debt?

This is not a dispute over whether unemployment insurance benefits should be extended. There is broad bipartisan agreement that they should be. It is instead a dispute about whether the costs of that spending should be offset by other spending cuts.

The President draws the contrast with the enactment of the Bush tax cuts without offsetting the corresponding deficit increases. This is a genuine partisan policy disagreement. I believe all spending increases should be offset by other spending cuts. While I would prefer that tax cuts be offset by spending cuts, I would not insist on it. This view derives from my belief that our primary fiscal problem is a spending problem, and that large future budget deficits are a result of massive projected spending increases, not because taxes are “too low.” While Team Obama attacks this idea of one-sided paygo, they forget to mention that President Obama has proposed extending the bulk of the 2001 and 2003 tax cuts without offsetting the deficit impact of doing so, putting him in the same position as President Bush. This suggests that President Obama’s logic is that it’s OK to extend “good” tax cuts without “paying for them,” but not “bad” tax cuts. Team Obama should be careful about accusing others of intellectual inconsistency on paygo.

Also, it is possible for people’s concern about the budget deficit to depend on both the proposed deficit-increasing policy and on the baseline deficit. In 2001 we (mistakenly) thought we were facing huge future surpluses. In 2010 we face record future deficits. It should not surprise anyone that Members of Congress are therefore more concerned about the deficits today than they were ten years ago.

THE PRESIDENT: These leaders in the Senate who are advancing a misguided notion that emergency relief somehow discourages people from looking for a job should talk to these folks.

The evidence is clear that unemployment insurance does discourage some people from taking a new job. The President’s phrasing is slightly different, suggesting that it discourages

[all] people from looking for a job. If any Republicans are arguing that, they’re wrong.

But there is a disincentive. The 2003 Economic Report of the President, written by President Bush’s Council of Economic Advisers under its chairman at the time, Glenn Hubbard, wrote (p. 122 of the report, p. 119 of the PDF):

Any time that policymakers consider offering or extending UI benefits, they face a difficult tradeoff. UI can provide valuable assistance to unemployed workers, but it may also create a disincentive for benefit recipients to return to work. Unemployed workers who rationally evaluate their options may postpone accepting new work until their UI benefits are exhausted or nearly exhausted. The result is higher unemployment and longer average spells of unemployment. In the study cited above, for example, 40 percent of those who had not received UI benefits, but only 35 percent of those who had, returned to employment within 4 weeks of their job loss. This 5-percentage-point difference hints at the disincentives built into UI, since fewer of those receiving it returned to employment quickly. Another study found more direct evidence: each additional week of UI benefits was estimated to increase the duration of the average unemployment spell by about a day. Many other studies have also found an association between the level of weekly UI benefits and the duration of unemployment. Still more evidence comes from Europe, where most countries have more expansive UI policies than the United States and have higher rates of unemployment and longer average unemployment spells. Although these differences in unemployment outcomes may not be due to differences in UI policies alone, the totality of the evidence suggests that they contribute.

And this graph hammers the point home (sorry for the small size, it’s the best I’ve got): 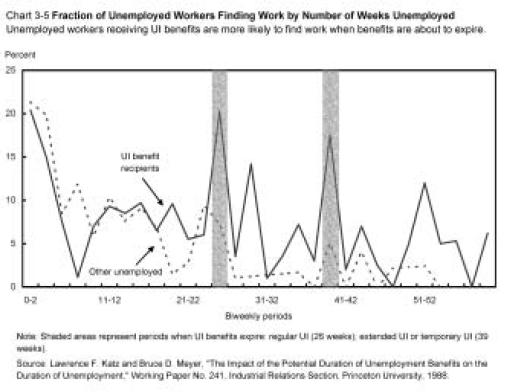 Chart 3-5 illustrates another aspect of the relationship between the availability of UI benefits and incentives to find a new job. Unemployed workers who receive UI benefits are more than twice as likely to find a job in the week before their regular benefits expire than in the several weeks immediately preceding. As noted above, UI benefits expire after 26 weeks unless extended, in which case they expire at 39 weeks (for workers receiving either extended UI benefits or temporary extended UI benefits). Perhaps not coincidentally, peaks in the fraction of unemployed workers finding work also occur around these expiration dates. Among unemployed workers who do not receive benefits, in contrast, there is no substantial difference in the likelihood of finding a job at these points in their unemployment spell.

This graph comes from a paper written by the former Chief Economist for the Department of Labor during the first two years of the Clinton Administration, Dr. Lawrence Katz.

I wrote about this tradeoff a little while back. For me this breakpoint occurs at about 8% unemployment. Above 8% and I don’t worry too much about the disincentive for some to take a new job, given that there are so many others who would take a job but can’t find one. Below 8% I worry much more about the disincentive and would lean against an extension of almost two years (99 weeks) of UI benefits.

The President’s attack today is part of a set piece. With Sen. Byrd’s replacement Carte Goodwin being sworn into office today, Team Obama knows they now have 60 votes to shut off debate on the Reid amendment and to enact the UI extension the President wants without having to offset the deficit increase. By sending the President out today to urge for this to happen, he can try to take credit after it does, even though there is almost no uncertainty left about the final outcome.