Here is Rahm Emanuel’s famous quote, from November 19, 2008. You don’t need to watch more than the first minute.

The President’s Oval Office address last night suggests an implementation of this principle, as he tries to reconfigure the climate change / cap-and-trade debate into a new War on Fossil Fuels. It appears the President will attempt to use the oil spill crisis as an opportunity to enact cap-and-trade legislation which otherwise has almost no chance of becoming law.

In launching this war he is foregoing an opportunity for targeted legislation addressing only the risks of deepwater drilling. This alternative legislative path could give America and her President a quick, easy, bipartisan policy victory which I believe could rally and unify the nation when we sorely need it.

The War on Fossil Fuels

Let’s look at the words used by the President last night. We begin with his heavy use of military imagery:

We will fight this spill …

I’ve authorized the deployment of over 17,000 National Guard members along the coast. These servicemen and women …

The same thing was said about our ability to produce enough planes and tanks in World War II.

We can see that fossil fuels are the enemy:

For decades, we’ve talked and talked about the need to end America’s century-long addiction to fossil fuels.

… as long they seriously tackle our addiction to fossil fuels …

The use of “war” with “addiction to fossil fuels” suggests a closer communications parallel may be the “war on drugs.”

We can also see that climate change, cap-and-trade, global warming, and greenhouse gases are not the communications priority. The President referred once to “a strong and comprehensive energy and climate bill” passed by the House earlier this year. He did not say any of the other phrases, most notably not “cap-and-trade.” That language appears to be nearly dead. Then again, he did refer to “pricing carbon” one week ago.

Most importantly, the President defined the policy goal as “the need to end America’s century-long addiction to fossil fuels.” He reiterates this by saying,

So I’m happy to look at other ideas and approaches from either party – as long they seriously tackle our addiction to fossil fuels.

Q: How does the President reply if the minority party offers, ‘We will work with you in good faith on an answer to deepwater drilling safety, but will continue to disagree with you on broader questions of fossil fuels and specifically on cap-and-trade.” Does he take the partial win and solve the deepwater drilling problems? Or does he refuse and hold out for the rest of his energy/climate agenda?

We use almost no oil to produce power in the U.S., and electricity powers only a tiny fraction of our transportation, despite recent increases in hybrid and natural gas vehicles. Yes, they’re growing at a rapid rate. But the overlap between oil as one type of energy source vs. coal and natural gas as another is vanishingly small. My favorite energy graph makes this clear. Look at the thin green lines that go from petroleum to supply residential and commercial power, and at the even thinner orange and turquoise lines that show how much our transportation is fueled by electric power and natural gas. 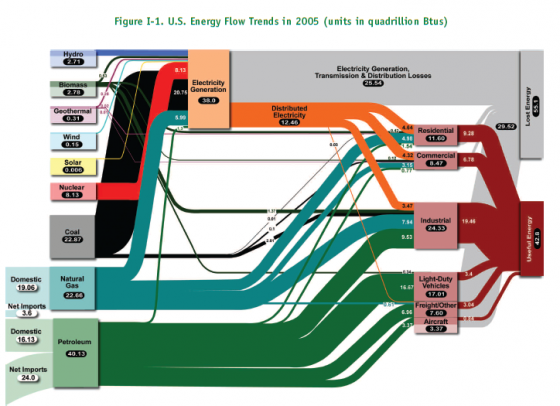 (Source: The University of California, Lawrence Livermore National Laboratory, and the Department of Energy)

Someday when battery technologies improve, the fuel and power worlds will blend in the U.S., and there will be strong and direct economic relationships between the production of electric power and the use of oil. Until that day, from an energy perspective, “fossil fuels” conflates oil with coal and natural gas in a way that is at best confusing and at worst misleading. Substituting biofuels for oil or making vehicles more fuel efficient has almost no effect on the amount of coal or natural gas we use. “Produc[ing] wind turbines,” “installing energy-efficient windows, and small businesses making solar panels” are quantitatively irrelevant to our use and production of oil. All the windmills and solar panels you could imagine will not reduce our dependence on oil as a transportation fuel.

The President risks overreaching by trying to use a crisis in one subset of domestic oil drilling to enact a policy agenda that applies to all types of oil drilling and imports, and to coal, and to natural gas. Were he to focus just on solving the deepwater drilling problem, he’d have a slam dunk. Instead he’s trying not to let this crisis go to waste, and to use it as an opportunity to enact indirectly related policies that are much more hotly disputed.

With these requirements, some amount of deepwater drilling would cease because it wouldn’t be economical with the added costs. I’m confident that policymakers across the board would say, “Fine. If the added protection is not worth that extra cost, then don’t drill there. I want a belt, and suspenders, and Velcro too.”

I believe the legislation in scenario 1 would pass the House and Senate within a week or two, with overwhelming and possibly unanimous bipartisan majorities. The President could quickly unify the country and celebrate a wise bipartisan solution to preventing the recurrence of a painful problem. That would still leave the existing crisis, but the long-term policy issues would be solved.

Scenario 2 – The President pushes for enactment of cap-and-trade legislation which raises the cost of gasoline and diesel fuel, and of power produced from coal and natural gas. He insists that Congress include all the policies from scenario 1 in this bill.

Scenario 2 is a huge gamble. If the President succeeds, it will probably look like the health care fight. It will be a long, vigorous, largely partisan debate, overlaid with regional economic and energy interests. Legislation will become law only after squeaking out a 60th vote to overcome a filibuster.

The President knows he cannot enact cap-and-trade before November without a game changer. He assumes his legislative margin will be (much) smaller next year. He is rolling the dice to see if he can turn this crisis into a legislative opportunity, in what may be his last chance to enact a national carbon price.

Sometimes it’s good to vigorously debate important policy issues. Sometimes America needs to make a huge directional change and only a strong President can lead us in a new direction. These directional shifts are painful for the country as we argue and fight, but if you agree with the new direction, that squabbling is worth it.

I think America is as deeply divided on climate change issues as it is on health care. I’d like us to change direction on energy, but I’m OK doing so gradually as technology allows us to do so without imposing enormous costs on our economy. This explains why I often support policies focused on energy technology research and development.

I think solving our deepwater drilling engineering safety problems is now a top national policy priority. I think our other top domestic policy priority needs to be near-term economic growth. I rank climate change lower on my list of policy problems.

The President could have a quick, clean, bipartisan win on legislation that would eliminate the risk of another spill like this one.

Instead he is rolling the dice again, gambling that he can leverage the problems with drilling for oil in deep water to get legislation that also raises costs for power production. He is also choosing a path that he knows will provoke partisan conflict. Maybe he sees an electoral benefit to having the fight.

I assume the President believes what he says, and he thinks that fossil fuels and the combined problems of environmental damage from deepwater drilling, the national security externalities and economic costs of our oil dependence, the pollution and climate change externalities from carbon emissions from all sources, all must be solved at once and immediately. He wants to change America’s direction sharply and suddenly, even if doing so is painful economically.

I respectfully disagree with sharply and suddenly, because the benefits are uncertain and the costs are significant. Also, the specific cap-and-trade bills being debated are a horrible mess of political bargaining and implementation nightmares.

The President’s War on Fossil Fuels will reinvigorate an intense policy debate on the future of energy and environmental policy in America. He may be successful in bending the Congress to his will, as he did with health care. He may fail.

I prefer another path that is simpler, faster, more unifying, and more targeted at the problem that is in the forefront of our consciousness this summer.

I think it would be good for America to unite and say, “We worked together to prevent that problem in the Gulf from happening again.” It is easy to do so, and I wish the President would choose that path instead.