CBO Director Dr. Douglas Elmendorf has posted the slides he used in a presentation Wednesday to the Institute of Medicine, titled Health Costs and the Federal Budget. The presentation obliterates the claims of the President and his allies about the effects of the new laws on federal health spending and the budget.

For months the President and his Budget Director correctly argued that the goal of health care reform was to “bend the cost curve down.” The projected path of per capita health spending is unsustainable and will result in three bad outcomes:

Here is the President at the Blair House:

The third thing it seems — I assume we can all agree on is that over the last decade costs have doubled for health care in America — costs have doubled for government-provided health care, but everybody’s health care. And that that meant that right now everybody knows that that wrecks budgets, it wrecks state budget, it wrecks family budgets, it wrecks federal budgets. Every 35 cents of every dollar spent on health care is spent by the federal government or the state governments for Medicare and Medicaid — 35 cents on the dollar. That doesn’t count veterans and other things, just those two. And so — and what’s happened is — on the dollar, on every health care dollar.

And so we’re facing, all of us around this table, Democrat and Republicans, are facing the fact that there’s $919 billion now we’re spending on Medicare and the federal portion of Medicaid, and that if things — I don’t see any firewall is going to keep costs from doubling again, we’re going to be talking about in the year 2019 we’re going to be spending $1.7 trillion if we don’t do something to bend that curve.

A common refrain from the President and his Budget Director was “health care reform is entitlement reform.” And through two budget cycles, when senior Administration officials were pressed on their plans for deficit reduction, they always returned to the argument that health care reform would substantially improve the federal budget outlook.

CBO Director Dr. Douglas Elmendorf has shown this argument to be incorrect.

This is the best and most direct presentation I have seen on the subject. I commend Dr. Elmendorf for his honesty, clarity and bluntness. I wish he had been this blunt and this clear in February and March before these bills became law.

Here is Dr. Elmendorf’s first slide. Emphasis is mine.

Rising health costs will put tremendous pressure on the federal budget during the next few decades and beyond. In CBO’s judgment, the health legislation enacted earlier this year does not substantially diminish that pressure.

Here he shows the effects on Medicare spending of the two new health care laws, as well as the effect if Congress permanently extends a Medicare “doctors’ fix” like the “temporary” one being considered in the House today. The light blue line represents Medicare spending before the new laws, the dark blue line after the new laws, and the dotted line is the new laws plus a permanent doc fix. You can see that there is net Medicare savings even with a permanent doc fix, but the unsustainable spending growth still exists. And this is the part of the federal government where they “cut” (slowed the growth of) spending to pay for part of the new health care subsidies. Now Dr. Elmendorf shows us the effects of the new laws on spending for Medicaid, CHIP, and the new health insurance subsidies’ You can see how the new spending line (in light blue) is an enormous increase over the baseline spending in dark blue. 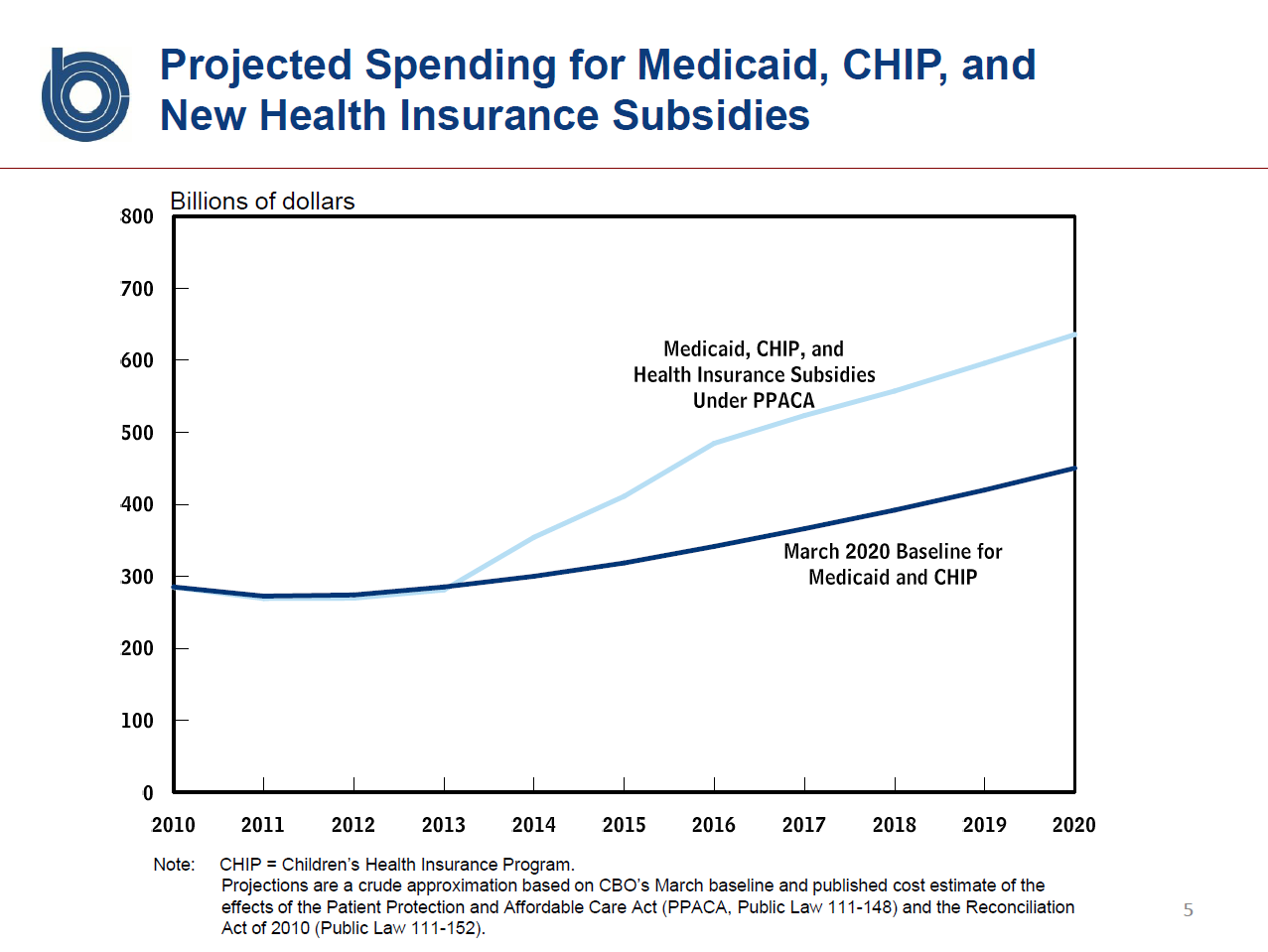 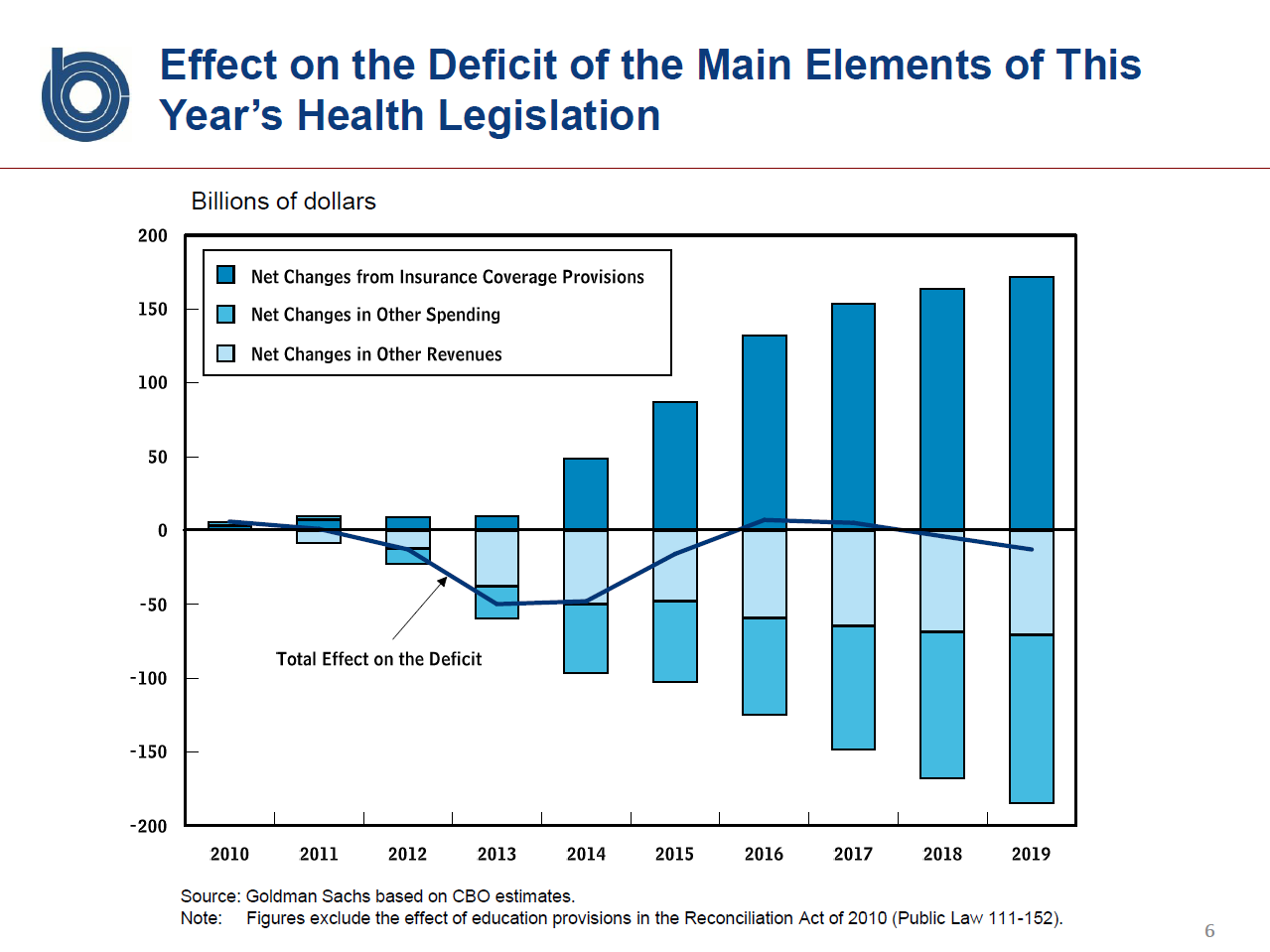 Since the dark blue bars are roughly the same height as the combination of the light blue bars, the net deficit effect shown by the line is right about zero. Congressional Democratic leaders optimized to maximize coverage and minimize political pain from spending cuts and tax increases without increasing the deficit. Had they instead focused on the the President’s stated priority of “bending the cost curve down,” this graph would have looked quite different. The deficit reduction boasted about by the Administration and its allies is trivially small.

The legislation will increase

[the federal budgetary commitment to health care] by nearly $400 B during the 2010-2019 period but reduce it in the following decade.

The legislation will reduce budget deficits by about $140 billion during the 2010-2019 period and by an amount in a broad range around one-half percent of GDP during the following decade.

Q: How can both these statements be true? Over the next decade, how can the new laws increase the federal budgetary commitment to health care while reducing the deficit?

A: By redirecting non-health dollars to health. The increased Medicare payroll taxes on “the rich” are the best example. These laws devote more federal resources to health care. We were supposed to move the other way and devote less.

In the coming years, we’ll be forced to make more tough choices and do much more to address our long-term challenges, from the rising cost of health care that Peter described, which is the single most pressing fiscal challenge we face by far, to the long-term solvency of Social Security.

Once again Dr. Elmendorf debunks this claim that “it’s all about health cost growth.” This graph shows that, at least for the next decade, most of the growth in federal entitlement spending is the result of aging. Excess cost growth of health spending is a critically important but secondary factor. 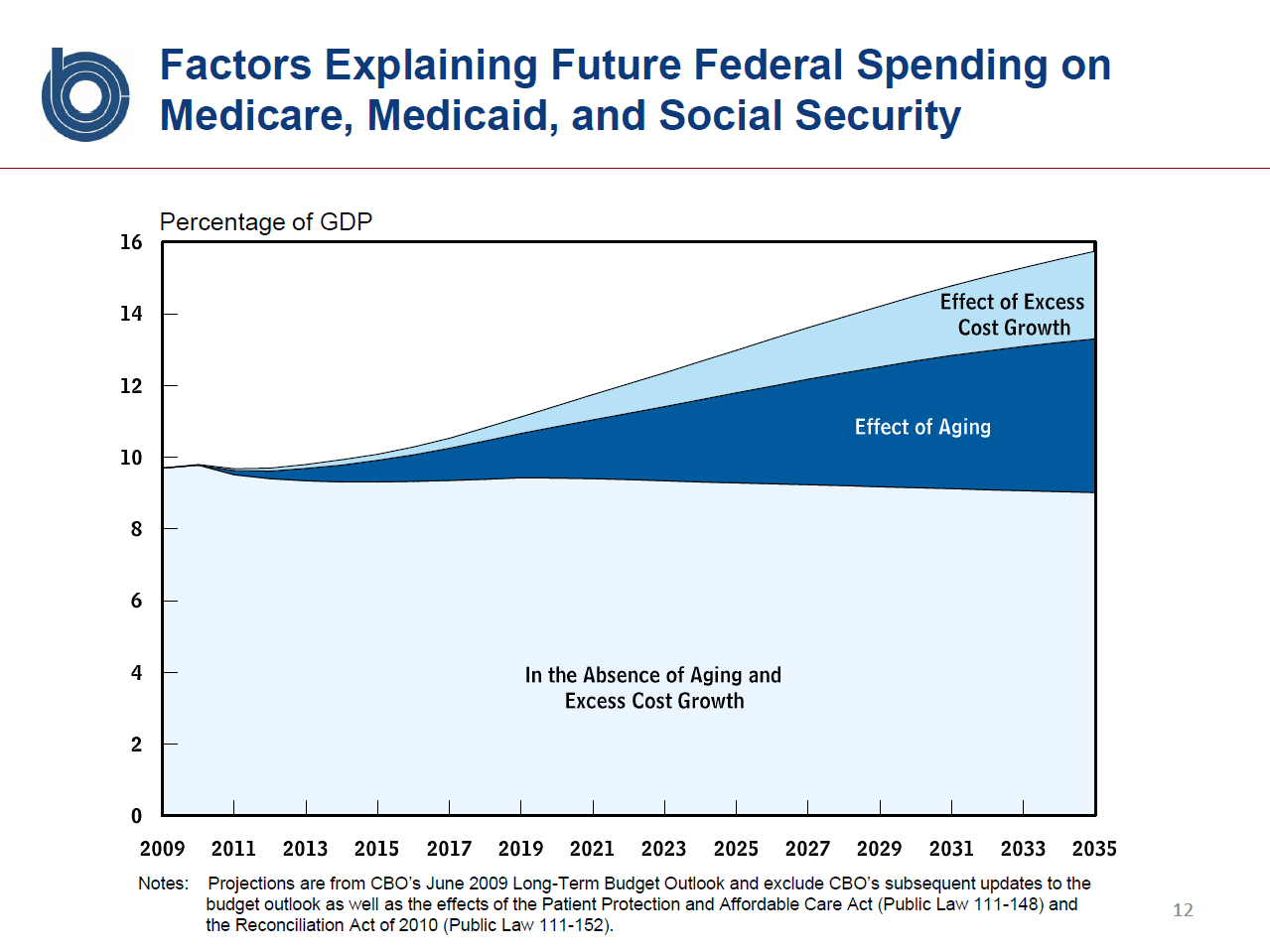 Putting the federal budget on a sustainable path would almost certainly require a significant reduction in the growth of federal health spending relative to current law (including this year’s health legislation).

Never before have I seen a CBO Director so bluntly refute the policy claims of a President and his Budget Director.