Headed in the right direction. Must go faster.

Here is a graph of real GDP over the past ten years (data are from BEA): 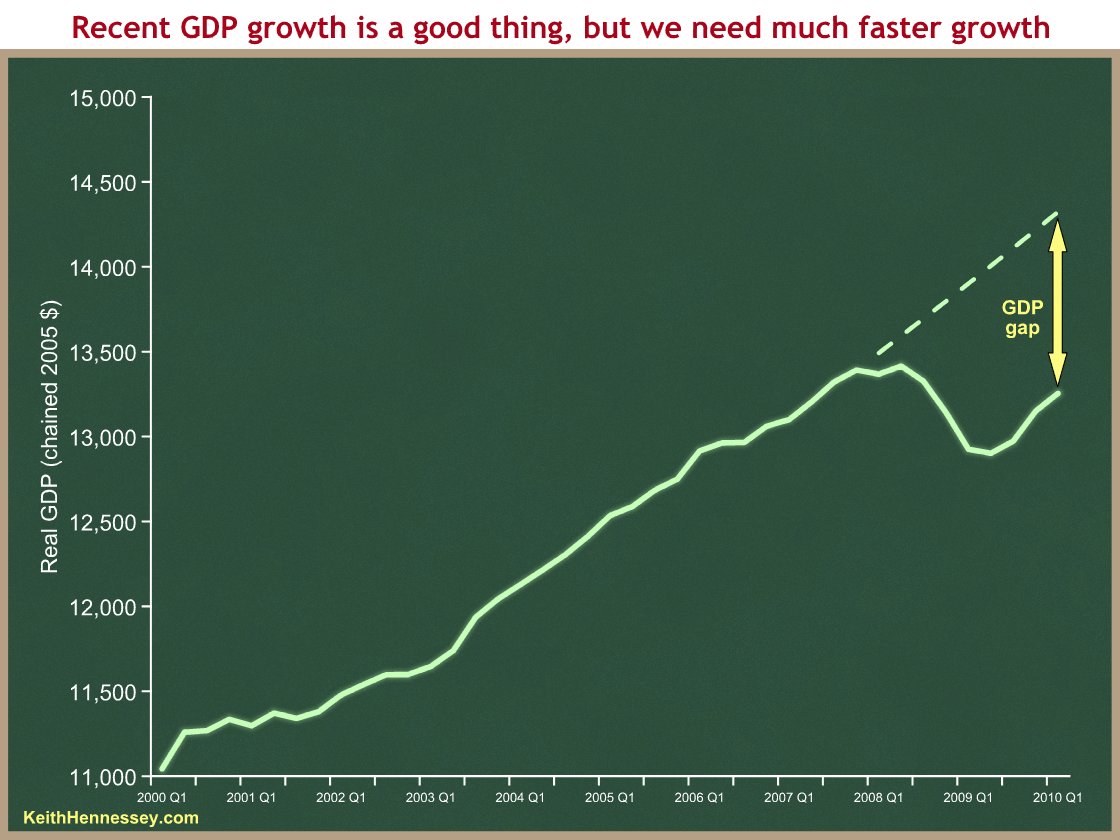 You can see the mild recession in Q1-Q2 of 2008, followed by a severe drop beginning in the third quarter of that year. Growth turned positive in the third quarter of 2009 and has grown at a 3% annual rate since then. The upturn is great news, and when the economy is operating near capacity a 3% growth rate is solid. Most economists assume the long-run growth rate of real GDP is a smidge above 3%.

But you can see the enormous gap between where we are and my back-of-the-envelope calculation of where GDP would be were we operating at full employment and full capacity. That’s more than a trillion dollar gap in a $13 (actual) or $14 (potential) trillion economy. There are a lot of idle resources (people and capital) that aren’t being used but could be.

The 3% growth rate over the past three quarters represents the recent upward slope of the solid green line. The problem is that the dotted green line is also growing at 3%, so to close that huge gap we need the solid line to slope upward much more sharply. There are also risks to continued growth – another housing price downturn, the stimulus runs out of juice, employment turns down, Europe implodes. Then again, there are always risks to growth.

If we were to maintain our recent 3% growth rate, the two lines would grow in parallel and we’d never close the gap. We therefore need real GDP growth to accelerate to well over 3% (think 6%-7%) to close that gap in any reasonable timeframe.

I’m trying to learn from smart economists why we’re not bouncing back more sharply. Is it because the recession was caused by a financial crisis, collapsed credit markets, and balance sheet shocks that are still being repaired? Is it policy induced? Has something more fundamental changed in how the U.S. economy recovers from recessions? The 2004 recovery was slow in creating job growth as well.

Since many of my readers operate in a partisan political context, I want to be clear that the recent trend is good news. I also think that, given a near-zero fed funds rate and enormous short-term and long-term budget deficits, there is little the President and Congress can do to dramatically accelerate near-term GDP growth. There are the usual debates about policy uncertainty, size of government, and protectionism, but there isn’t a secret magic wand sitting in the corner, unless you’re comfortable with even more huge fiscal stimulus and pushing budget deficits well above 10% of GDP. I hope Republicans in Washington will resist the temptation to portray the recent recovery as anything other than good.

At the same time, Democrats in DC will be tempted to emphasize the positive trend while downplaying the reality that, while getting stronger, the economy is still far weaker than it could and should be. We can and need to do much better.