The two pending health bills are about health care and expanding health insurance coverage. They’re not about fiscal stimulus, nor about building highways, hiring teachers, or cutting State taxes.

Then why does the second health care bill provide sixteen States and DC with billions of dollars in unrestricted funding, spending which would produce no change in health insurance enrollment?

According to the description of the new second health bill just released by Congressional Democratic Leaders, sixteen States and DC will receive billions of new dollars that they will be able to use for any purpose. This funding is, in effect, fiscal stimulus, and will not expand health insurance enrollment.

This may sound crazy, but it’s a semi-logical overreaction to the Nebraska-specific Medicaid earmark in the Senate-passed health bill. In an attempt to provide equity, the new second health bill would give 16 States and the District of Columbia billions of dollars they could spend on purposes other than health care.

In all 50 States and DC, Medicaid provides health care for low-income moms and kids, as well as for low-income and some middle-class elderly and disabled people. The law requires States to cover these mandatory populations.

The law makes other populations optional for States. If a State chooses to cover an optional population, the feds pick up part of the cost. This means that Medicaid is really 51 different programs, with some States covering a much broader group of people than others. The optional population we’re interested in are low-income adults, with or without kids.

Medicaid is a shared federal-State financing arrangement. On average the federal government pays 57 cents of every Medicaid dollar spent, and the State kicks in the other 43 cents.

This federal match rate varies from one State to the next, based on a complex measure of the State’s relative wealth. Relatively wealthy States like New York and California have a federal match rate of as low as 50 cents federal. In a relatively poor State like Mississippi the feds pick up 85 cents of each Medicaid dollar spent.

Thanks to citizen blowback, Congress has decided that Nebraska should not get a special deal. But rather than just eliminating this increased spending, it appears the new legislation will expand this provision to cover all States. It appears the new reconciliation bill will force taxpayers around the country to further subsidize any State that expands its Medicaid population to cover low-income adults, increasing the federal match rates paid in those States. If this is in fact in the second health bill, it’s expensive.” CBO says the full incremental cost of those expansions would be $35 billion over ten years. Since a broad-based expansion won’t cover all the costs, it’s an unknown fraction of that amount, but it’s still billions of dollars.

“Hold on just a minute,” says California. “We expanded our Medicaid coverage years ago. We’re already covering the low-income adults that you feds are bribing paying Nebraska and other states to now cover. Why should they get a higher federal match rate than we do to cover the same eligibility group? That’s not fair. We should get a higher match rate too if we’re already covering those people.” Fifteen other States and DC chime in, “Yeah, me too.”

The President’s pre-Blair House proposal therefore included the following language on page 9. I have emphasized the key language in red:

Improve the Fairness of Federal Funding for States. States have been partners with the Federal government in creating a health care safety net for low-income and vulnerable populations. They administer and share in the cost of Medicaid and the Children’s Health Insurance Program (CHIP). The Senate bill creates a nationwide Medicaid eligibility floor as a foundation for exchanges at $29,000 for a family of 4 (133% of poverty) – and provides financial support that varies by State to do so.

Relative to the Senate bill, the President’s Proposal replaces the variable State support in the Senate bill with uniform 100% Federal support for all States for newly eligible individuals from 2014 through 2017, 95% support for 2018 and 2019, and 90% for 2020 and subsequent years. This approach resembles that in the House bill, which provided full support for all States for the first two years, and then 91% support thereafter. The President�s Proposal also recognizes the early investment that some States have made in helping the uninsured by expanding Medicaid to adults with income below 100% of poverty by increasing those States’ matching rate on certain health care services by 8 percentage points beginning in 2014. The President’s Proposal also provides additional assistance to the Territories, raising the Medicaid funding cap by 35% rather than the Senate bill’s 30%.

Congressional Democratic Leaders have now released a description of their second health bill. It appears to parallel the President’s proposal in this respect:

So California, which already covers low-income parents, would, under the President’s proposal, see their federal match rate “on certain services” increase from 50% federal to 58% federal beginning in 2014. Depending on how “certain services” are defined, for a State as large as California that could mean billions of additional federal dollars over time. California’s MediCal program spent $36 billion three years ago, and is certainly spending more today. A small percentage increase in the federal match rate could therefore mean a lot of new money for California. We can’t tell how much until we see legislative language. 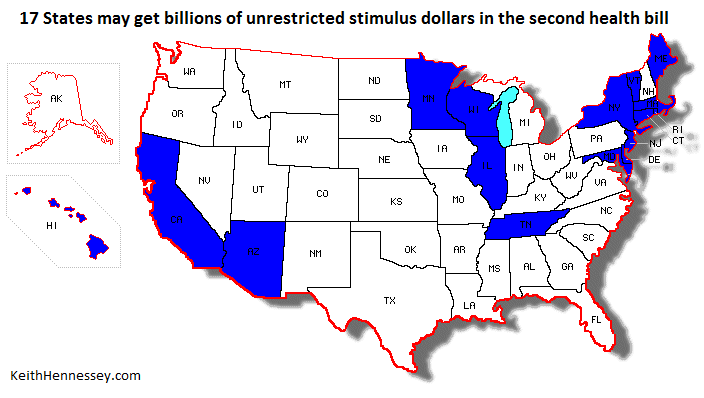 In the second health bill the equity argument raised by the Nebraska-specific fix is addressed completely, but at the cost of enormously reduced efficiency. These seventeen States would receive billions of additional federal dollars for doing what they are already doing. These new federal dollars would supplant State dollars spent on Medicaid.

While this new federal money would be labeled “Medicaid,” those billions of extra federal dollars for covering no more people would free up the same amount of State dollars, which could be used for any purpose. A budget expert would say “All money is fungible,” and would label this federal windfall as a general revenue transfer from the federal government. In common parlance, this is billions of dollars of fiscal stimulus for sixteen states and DC, paid for by taxpayers in other States. It would have no effect on health care coverage or on any health care program. The only differences between this new spending and the fiscal stimulus enacted last February are that this money would be unrestricted in its use, and, depending on the legislative language, it could be a permanent subsidy to these 17 States rather than a one-time stimulus.

California has a $7 B budget gap to close this year and a $14 B gap to close next year, so I’m sure these funds would help. Sixteen other States could use this ongoing stream of unrestricted extra money for any purpose. They could build roads, improve their schools, or hire more State employees. They could pay down debt, increase State government spending, or cut State taxes. They could use these taxes paid by residents of other States for policy improvements or for pork projects.

While I appreciate the equity argument made by these 17 States, I don’t think we can afford to give them billions of dollars of unrestricted funds. Taxpayers have already ponied up more than $800 B in last year’s fiscal stimulus law, and tens of billions more in other legislation.

Even more importantly, Members and the American people think these are health care bills, not another fiscal stimulus. Few Members of Congress understand they may vote for a bill that would provide 16 States and the District of Columbia with billions to spend on things unrelated to health care.

It’s easy to understand why those trying to assemble a 216 vote coalition might have made this compromise. Yet the result conflicts with a common understanding about the purpose of the health care bill. This legislation has not been advertised as a targeted fiscal stimulus for certain States. This funding should be removed from the second health bill.