Don’t cut Medicare. The reform bills passed by the House and Senate cut Medicare by approximately $500 billion. This is wrong. There is no question that Medicare is on an unsustainable course; the government has promised far more than it can deliver. But this problem will not be solved by cutting Medicare in order to create new unfunded liabilities for young people.

‘Don’t cut Medicare. The reform bills passed by the House and Senate cut Medicare by approximately $500 billion. This is wrong.’ So declared Newt Gingrich, the former speaker of the House, in a recent op-ed article written with John Goodman, the president of the National Center for Policy Analysis.

Now, Mr. Gingrich was just repeating the current party line. Furious denunciations of any effort to seek cost savings in Medicare – death panels! – have been central to Republican efforts to demonize health reform. What’s amazing, however, is that they’re getting away with it.

Speaker Gingrich and Dr. Goodman could have better insulated themselves from Krugman’s attack if their first italicized sentence had read, “Don’t cut Medicare to finance an expensive new entitlement.” I disagree with them in the way they have written it. It is not wrong to “cut” (slow the growth of) Medicare. It is wrong to do so if you are turning right around and spending those savings on a new spending program, leaving our long-term fiscal situation essentially unchanged.

They are doing what some Congressional Republicans did during the health care debate – take the most politically effective elements of a legitimate policy position on Medicare, and use them to attack the pending health care legislation. In doing so they help keep ObamaCare dead, but at the cost of weakening the Republican position on Medicare and undermining our ability to address long-term budget problems.

They cover themselves with their “unsustainable course” sentence, but they make it easy for Dr. Krugman and others to frame their position as one of irresponsible opposition to doing anything to address our the long run fiscal challenge. Many Congressional Republicans did the same thing, falsely wrapping themselves in the cloak of “protecting Medicare” when in fact in a deficit-reduction context they would probably make more significant changes to Medicare than those contained in the pending health care legislation.

I think Speaker Gingrich and Dr. Goodman are right on policy but are trying to be too cute on the politics. While it’s probably effective, they expose themselves unnecessarily to attacks from the left. And the language they used undermines responsible Republicans who want to push for long-term Medicare reforms.

Unsurprisingly, Dr. Krugman is in the vanguard of those attacks, and he is once again over the top.

I wish that Speaker Gingrich and Dr. Goodman were not trying to play the senior card against ObamaCare, especially now that it’s dead. Dr. Krugman attacks them for doing so, and then immediately does the same to Rep. Paul Ryan for being responsible. Dr. Krugman is attacking the Medicare component of Mr. Ryan’s “Roadmap for America’s Future.”

In the same column, Dr. Krugman goes way beyond Gingrich/Goodman in his use of inflammatory scare language:

… people would receive vouchers and be told to buy their own insurance … this new, privatized version of Medicare would erode over time … there wouldn’t be much of a Medicare program left … In short, there would be Medicare cuts.

So much for subtlety.

1. The size of changes

Stepping back a bit:

The policy reality is that if we are to prevent a massive debt explosion, unprecedented tax increases, and/or the destruction of other federal spending programs, Medicare’s spending growth will have to be dramatically curtailed from its current unsustainable 6.6% average annual growth rate. Medicare’s cost to taxpayers this year will be $25 B larger than last year. The one-year increase in Medicare spending exceeds this year’s spending on any of the following:

Every time Dr. Krugman, Speaker Gingrich, or Dr. Goodman say “cut Medicare” to describe a proposal that would merely slow its growth, they contribute to our long-term deficit problem, the likelihood of future tax increases, and the pressure on other purposes of the federal government. Responsible policymakers on both sides of the aisle need to elevate the debate and agree that Medicare spending must be slowed, even as we debate how best to do that and whether those changes should be combined with other spending increases.

2. How to change the structure of Medicare 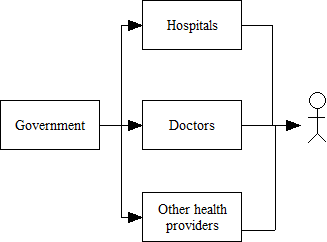 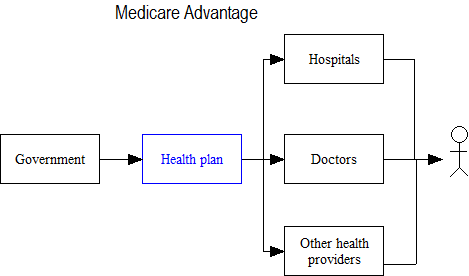 Dr. Krugman, the Obama Administration, and Congressional Democrats want to move more Medicare beneficiaries into the first structure, fee-for-service Medicare. Were this model applied to everyone, we’d call it a single payer system. The government directly interacts with providers of health care goods and services. It pays those providers and it regulates them. The functions of insurance are contained within the government. This allows the government and policymakers not just to pool risk, but to redistribute the costs of that risk among beneficiaries.

Mr. Ryan and most Congressional Republicans want over time to move Medicare to the second structure, now called Medicare Advantage. This is a parallel to our employer-based health insurance system, in which the payer (in Medicare’s case the government, for working people their employer) pays premiums to a risk-bearing private health insurance plan. The plan then interacts with providers of health care goods and services, negotiating payment rates with them and “regulating” them through contract terms. One huge advantage of this system is that a private firm is much better able to adapt to changes in medical care. The government is slow, bureaucratic, and vulnerable to political pressure.

Today new seniors are enrolled in fee-for-service Medicare and have to choose to switch into a Medicare Advantage plan. The Ryan plan would say that, over time, new senior citizens would be enrolled in Medicare Advantage. I wonder if Dr. Krugman dislikes the “voucher” he gets now from his employer (the New York Times or Princeton), “forcing him to buy his own insurance?”

Finally, Dr. Krugman attacks the Ryan plan for increasing the means-testing in Medicare. Mr. Ryan wants to focus whatever amount of money is spent on those who are least able to afford paying. Dr. Krugman instead wants to subsidize everybody.

Dr. Krugman claims “By the time Americans now in their 20s and 30s reached the age of eligibility, there wouldn’t be much of a program left.” This is an absurd claim. Under the Ryan plan, per capita Medicare spending would grow over time. Dr. Krugman further argues that “the value of these vouchers would almost surely lag ever further behind the actual cost of health insurance.” He apparently fails to understand that the “actual cost of health insurance” grows over time in large part because private sector payers follow Medicare’s lead in setting provider payment rates. In addition, both the Medicare benefit and private health insurance benefits improve over time as new, more expensive procedures and technologies are added.

The bottom line, then, is that the crusade against health reform has relied, crucially, on utter hypocrisy: Republicans who hate Medicare, tried to slash Medicare in the past, and still aim to dismantle the program over time, have been scoring political points by denouncing proposals for modest cost savings – savings that are substantially smaller than the spending cuts buried in their own proposals.

And if Democrats don’t get their act together and push the almost-completed reform across the goal line, this breathtaking act of staggering hypocrisy will succeed.

He apparently fails to realize: