How much bailout money will taxpayers get back?

The Congressional Budget Office (CBO) has released their assessment of the Office of Management and Budget’s semiannual TARP report. That assessment estimates how much cash has gone out the door for each part of TARP, and how much CBO expects will ultimately be returned to the Treasury. I have converted CBO’s table (Table 1 on page 2) to a set of graphs. Looking at the Capital Purchase Program (CPP) in the bottom bar, $199 B has gone out the door in outlays, and CBO expects $174 B of that will be paid back. CBO calculates a subsidy rate for each program, which for CPP is 25 / (174 + 25) = 13%. Taxpayers should expect to recoup 87% of the funds that were invested on their behalf in the Capital Purchase Program and lose the other 13%. 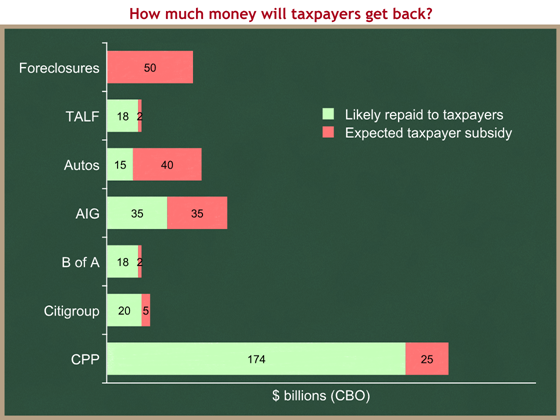 You can see from the graph that most of the funds went to capital purchase: CPP + specific firm deals (AIG, Bank of America, and Citigroup). CBO thinks we taxpayers will get most of our money back from Bank of America and Citigroup. We’ll get about half back from AIG, and a little more than a quarter back from the autos and auto finance companies. The Administration’s foreclosure mitigation program is a spending program, not an investment, and thus we expect to get none of those funds back. Footnote (d) on CBO’s table contains a surprise: “The Treasury has not yet disbursed any of the $15 billion allocated as of June 17, 2009, for foreclosure mitigation.” We heard a lot about the President’s efforts on foreclosure mitigation, and yet no cash has flowed.

To answer the question, “How much bailout money will taxpayers get back?” CBO estimates that:

CBO provides further detail on the Capital Purchase program by subdividing it into two parts: CPP for the 32 banks that have already paid back the Treasury, and CPP for all the other banks. Here’s the same graph, but with CPP split into those two parts. You can see that the net cost to the taxpayers from the 32 banks that have already paid back Treasury was (only) $1 B. CBO is guessing a much higher loss on the remaining outstanding CPP investments. 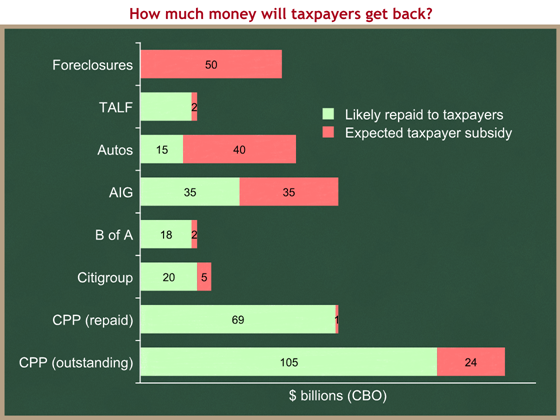 We do not have similar estimates for all of the Fed actions, but we do for the FDIC’s actions, and for the bailout of Fannie Mae and Freddie Mac. The picture changes dramatically when we add these non-TARP financial rescue funds. Courtesy of Sen. Judd Gregg’s excellent Senate Budget Committee Republican staff, I’m going to add in orange the estimated taxpayer costs of FDIC’s component of the Citigroup rescue, and CBO’s estimate of the taxpayer cost of bailing out Fannie Mae and Freddie Mac. 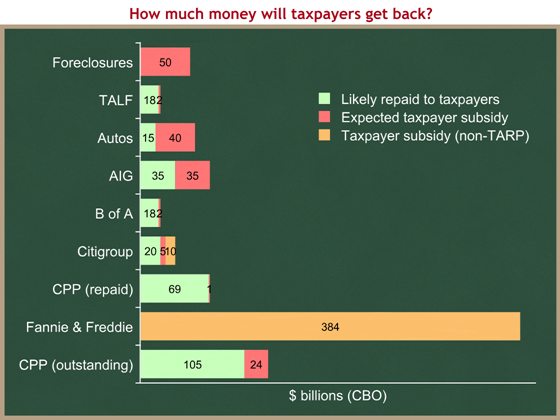 CBO estimates that the cost to the taxpayers of the failure of the GSEs, Fannie Mae and Freddie Mac, will be $384 B. That is 2.4 times larger than all the other TARP and non-TARP costs (shown here, and excluding the Fed) combined. Here’s the Budget Committee Republican staff’s Budget Bulletin:

CBO estimated that the federal government immediately absorbed a loss of $248 billion for the book of business the GSEs had in September 2008. To maintain an active mortgage market, the federal government is continuing to operate the GSEs, whose new commitments entered into after September 2008 would lose an estimated $136 billion over the 2009-2019 period according to CBO.

Thus when we rank the expected cost to the taxpayers of the different TARP and non-TARP programs, we get:

And updating to include TARP + FDIC + GSEs (but not the Fed facilities), it appears CBO estimates the net cost to the taxpayer of all these non-Fed facilities will be about $553 B.

Thanks to Jim Hearn of Sen. Gregg’s Budget Committee staff for his incredible table and assistance.

If you’re really into budget policy, you should keep your eye on the Budget Bulletin. You can subscribe by emailing their webmaster, whom you can find here.