Working in the West Wing: Doing a TV news interview on the North Lawn

This is the second in a series of occasional posts about the nitty gritty of working in the West Wing of the White House. I am describing things as they were in the Bush Administration. YMMV in the Obama Administration. Again, it seems a bit silly to write about such trivial details, but given the positive feedback on the first post in this series, here goes.

I did my first TV interview at the beginning of 2008 shortly after being promoted. At first it was stressful, and it took me a while to get used to it. Now that I’m on the outside, I do an occasional interview on CNBC, Fox, or CNN. Today I’d like to describe the mechanics of doing a TV news interview from the North Lawn of the White House. Even though I had worked in the White House for more than five years before my first on-camera interview, I did not know any of this until I actually had to do it.

Today is Jobs Day: the first Friday of the month, when the Labor Department releases the monthly employment report. The employment report is generally the most important economic data point of the month, and the business news channels (CNBC, Bloomberg, and Fox Business) always cover it. They always ask for someone from the Administration to comment on the data and what it means for the economy and the policy agenda. I see the Vice President’s economic advisor, Jared Bernstein, is doing CNBC now. In 2008, CEA Chairman Dr. Ed Lazear and I typically did this duty.

The jobs report is released at 8:30 AM on Friday. As with all economic data releases, Administration officials are embargoed from talking about it publicly for one hour after the release. This gives the markets time to process the data without the Administration’s viewpoint.

For each show broadcasting at 9:30 AM, a network producer negotiates with a staffer in the White House press shop. For us it was Eryn Witcher, a top-notch professional with prior experience in TV news who now works as the communications director at Stanford’s Hoover Institute. Eryn would negotiate with the producers and set Ed and/or me up with interviews.

Ed and I would talk the night before about the upcoming data and what we might say about it on the air. We were among a handful of officials who got the data reports before they were released, so that we could advise the President. Ed and his staff also used that data to prepare the daily “economic data memos” that the President received each morning.

We would generally watch the CNBC commentary immediately after the data release (at 8:30 AM sharp) to see if we had missed anything, and to take a temperature check on the initial market reaction and expert analysis. We would generally be prepped by Ed’s chief of staff, Pierce Scranton, who had an uncanny ability to predict what questions we would be asked, and coached us on how to give a short effective answer. If he wasn’t fighting other fires, Deputy Press Secretary Tony Fratto would also sit in the prep session.

A little after 9 AM someone would do my makeup in my office. Around 9:15 Eryn and I (or Eryn and Ed) would walk out to the North Lawn. You need a good TV tie (no busy patterns), straight collar (I was often scolded for button down collars), and American flag pin. After a while I got my own earpiece that I would bring out with me, so I wouldn’t have to use the common one that everyone else uses. It’s also nice to know you won’t lose the earpiece during the interview.

Each network has a TV camera set up in an area on the North Lawn next to the driveway from Pennsylvania Avenue to the West Wing entrance. The networks semi-permanently set up shop there in 1998 during the Monica Lewinsky scandal, and the gravel-filled area became known as Pebble Beach. It was refurbished during the Bush Administration with slate and the cameras and tripods are covered with heavy green canvas when they’re not being used. It is now referred to as Stonehenge, to which it bears a vague resemblance.

Here’s a diagram for CNBC (roughly). As always, you can click on the picture for a larger view. 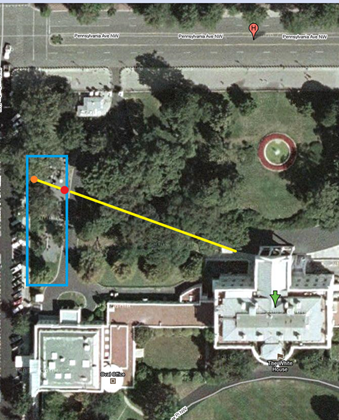 The West Wing is the square building in the lower-left (southwest) corner. The residence is in the lower-right corner, and that’s Pennsylvania Avenue up top.

The blue box surrounds Stonehenge with all the TV cameras. When you’re on CNBC you stand at the red dot, facing the camera at the orange dot. The yellow line shows the camera angle, extended to capture the north entrance to the Residence in the background.

If you look closely, to the right (east) of the blue box you can see the driveway that heads south from the Northwest Appointment Gate to the West Wing entrance. Visitors with appointments in the West Wing walk up this driveway, and you can occasionally see them passing behind someone being interviewed on TV (especially on the evening news broadcasts). If they’re walking from left to right on your screen, they’re arriving at the West Wing. Right to left, they’re leaving.

About 9:15 AM Eryn and I would walk out to Stonehenge. We would greet the cameraman and a producer, and I’d get miked up. All the producers I met were friendly and professional, and the cameraman are universally great. I would stand at the red dot facing the camera. My earpiece cord would clip to the back of my jacket collar. The cameraman would connect an audio cable to that cord, and there’s a small box at about waist high with a volume dial. He attaches a tiny microphone to my lapel and I’m all set.

The cameraman then adjusts the camera for the shot. I’m generally looking at myself on a monitor below the camera: tie is straight, flag pin is upright. (Left and right are reversed from what you’re used to in a mirror. That takes getting used to.)Around 9:25, I’ll hear audio of the show in my earpiece, and then a voice:

Voice 1: Mr. Hennessey, this is

[Bob] at CNBC headquarters. Can you hear me?

Voice 1: And you can hear the program?

Voice 1: Great. Can you count to ten for me, please, so we can do an audio check?

After another minute, another voice, the producer for my segment of the show.

Voice 2: Mr. Hennessey, this is [Tom]. We’re going to a commercial break, and will be going to you in about 2 minutes. You’ll be interviewed by [Erin / Mark / Erin & Mark].

Me: Sounds great. Thank you.

During my first few interviews, the substance wasn’t that difficult for me. I had been prepping principals for interviews and writing talking points for more than 13 years, now I just had to do the talking. The hard parts were the nerves and the physical mechanics:

Also, TV moves very quickly. Long answers don’t work, so I had to train myself to make my point in one or two sentences, rather than four or five. (That’s difficult for me.) If you go on too long, you’ll start hearing the anchor trying to jump in and move things along. And before you know it, you’re done.

After the interview, you unmike, thank the cameraman and producer, and you’re done. If you have another interview, you move down the line and repeat. If not, head inside, take off the makeup, and get feedback from your colleagues and friends who email that they saw you on TV.

I only did a few in-studio interviews, and guest hosted CNBC’s Squawk Box once. I was blown away by the ability of the anchors to multitask, and how quickly they think and react. While one of them is talking on camera, another is checking market news or data on their screen, or scanning email. Their producers are talking to them in their earpieces, and they are talking on camera with each other and the guests. The coordination, reaction times, ability to adapt and improvise, and teamwork among the anchors and their producers are amazing. Beginning that day, and ever since I have developed tremendous respect for those business news anchors hosting live fast-moving discussions. I have enough trouble doing a single five minute segment, and they do it for 2-3 hours five days a week.