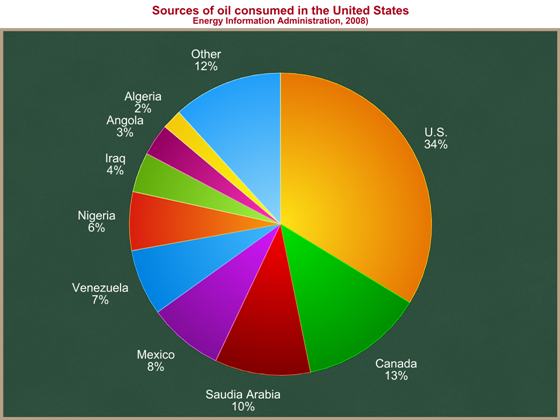 Imagine a huge reservoir, being filled by a handful of large rivers and a whole bunch of tiny streams. Several of the large rivers are controlled by governments (labeled “Saudi Arabia,” “Iraq,” “Iran,” “Nigeria,” and “Venezuela”) and are subject to being instantaneously shut off (or dramatically reduced) at any point in time. Everybody dips their cups into the reservoir to drink. If any one of those rivers shuts off or diminishes, there is suddenly less water going into the reservoir, and everybody who drinks from it is hurt (the level in the reservoir drops and the price of water spikes upward).

In a global oil market, consumers of oil buy it from wherever it is least expensive. The relative sizes of the above wedges are based on the relative costs of extracting oil and shipping it to the United States.

Imagine a world in which the U.S. produced 15 million bpd domestically, more than meeting our domestic needs, and that we imported no oil from other countries. Now imagine a big supply shock outside the U.S. (a terrorist attack in the Middle East, Nigeria rebels, the Iranian or Venezuelan government shuts off supply just because they can). Those nations that import from the affected country would lose their supply source. They would bid up the price of oil worldwide, including in the U.S. American consumers and firms would have to pay higher prices even though the supply shock occurred in a country from which we import no oil. We are still vulnerable to supply shocks in unfriendly or unstable nations whether or not we import directly from them. We are vulnerable to shocks in the supply of oil, wherever it occurs.

From a rhetorical perspective, we are “addicted to oil” or “dependent on oil.” We are not particularly dependent on foreign oil more than domestic oil. And since it is cheapest to produce oil in the Middle East, to the extent we use oil at all, some of it will always be imported. In terms of the graph above, if a new battery technology were to reduce the amount of oil used in the U.S. by half, and therefore reduce the total area of that pie chart by half, you would roughly expect the pie to shrink

[Update: see correction below]
, rather than to lose particular slices. We would still be sending American cash to oil suppliers from states with unfriendly leaders (like Venezuela), just less of it. Becoming more efficient in our usage of oil will help achieve this goal, but will not result in a shift away from any particular supplier nation.

There is a counterargument, but it’s a stretch.” You could argue that since foreign oil is a subset of oil, if our goal is to reduce our dependence on oil, it is not inaccurate to highlight a subset of that goal. “Dependence on foreign oil” is not incorrect, a speechwriter or communicator might argue, just misleading.

This misleading language, used by the President and Vice President and Members of Congress on both sides of the aisle, creates the impression that this particular problem of foreign oil can be solved. We can reduce our demand for oil in several ways, but we cannot solve the rhetorically attractive but misleading problem if it is defined as “dependence on foreign oil.”

Update: A commenter correctly points out that you would not expect the pie to shrink proportionately, but instead for the highest marginal cost producer of oil to drop out first. I believe that is correct as a global matter. It’s harder to tell exactly how dropping the highest marginal cost producer would affect any particular country’s sources, as things would shift around. But my earlier statement about “roughly expecting the pie to shrink” was an incorrect oversimplification. The point that we could not choose which slices to drop still stands.