I wrote the following last Wednesday evening, in anticipation of a straightforward farm bill veto. Little did I know the procedural snafu that would arise.

I have since edited it and written a follow-up. I will send the follow-up email soon. The first, written last Wednesday and included below, explains what we thought would happen. The second explains what actually happened. When combined, they provide an advanced-level course in how a bill becomes a law. We’re leaving Schoolhouse Rock in the dust.

As you read this, remember: it’s what we thought would happen last Wednesday. It’s still accurate, but glosses over the gory details of the procedural snafu that actually happened. That’s covered in the next note.

Last Thursday the President vetoed the farm bill. Here is the message he sent to the House of Representatives, stating his objections to the bill.

Here is a key quote from that veto message:

For a year and a half, I have consistently asked that the Congress pass a good farm bill that I can sign. Regrettably, the Congress has failed to do so. At a time of high food prices and record farm income, this bill lacks program reform and fiscal discipline. It continues subsidies for the wealthy and increases farm bill spending by more than $20 billion, while using budget gimmicks to hide much of the increase. It is inconsistent with our objectives in international trade negotiations, which include securing greater market access for American farmers and ranchers. It would needlessly expand the size and scope of government. Americans sent us to Washington to achieve results and be good stewards of their hard-earned taxpayer dollars. This bill violates that fundamental commitment.

In addition, his objections include that the bill:

When can we technically say that the President has vetoed the bill? (choose one)

Here’s the relevant portion of the Constitution:

Article I, Section 7. Every bill which shall have passed the House of Representatives and the Senate, shall, before it become a law, be presented to the President of the United States; if he approve he shall sign it, but if not he shall return it, with his objections to that House in which it shall have originated, who shall enter the objections at large on their journal, and proceed to reconsider it. If after such reconsideration two thirds of that House shall agree to pass the bill, it shall be sent, together with the objections, to the other House, by which it shall likewise be reconsidered, and if approved by two thirds of that House, it shall become a law. But in all such cases the votes of both Houses shall be determined by yeas and nays, and the names of the persons voting for and against the bill shall be entered on the journal of each House respectively. If any bill shall not be returned by the President within ten days (Sundays excepted) after it shall have been presented to him, the same shall be a law, in like manner as if he had signed it, unless the Congress by their adjournment prevent its return, in which case it shall not be a law.

The President does not write anything on the bill to be vetoed. Instead, he sends a “veto message,” which looks like a letter. It’s the attached document. He signs the veto message, but that’s not technically required by the Constitution.

And there’s no veto stamp. Sorry to disappoint you. 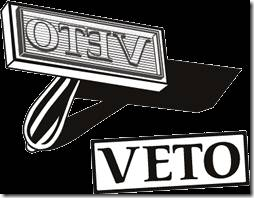 The President’s Executive Clerk then sends the bill (without marking by the President), along with the veto message, back to the House that originated the bill. This bill is H.R. 2419, which originated in the House of Representatives. Therefore the bill was vetoed when it arrived at the House Clerk along with the veto message. Interesting trivia point – the bill is actually vetoed when it arrives at the House (or Senate, as applicable).