Are taxes too low?

President Bush has signed into law 15 bills cutting taxes. The 2001 and 2003 tax laws were the biggies. Here’s a list.

This President has a well-established record as a tax cutter. Many of our critics argue that we cut taxes too much, and that we need to repeal some or all of the enacted tax relief.

These critics claim that taxes are now “too low.” They argue that we should repeal all the tax cuts, or at a minimum, allow them to expire in 2010 as they are scheduled to do under current law. Others argue we should allow some of the tax cuts to expire, those which they label as “for the rich.” I’m going to stay away from distributional arguments today, and instead focus on the aggregate level of taxation: how much in total is the Federal government taking from the private sector each year?

Are taxes too low now? Are they low by historical standards? 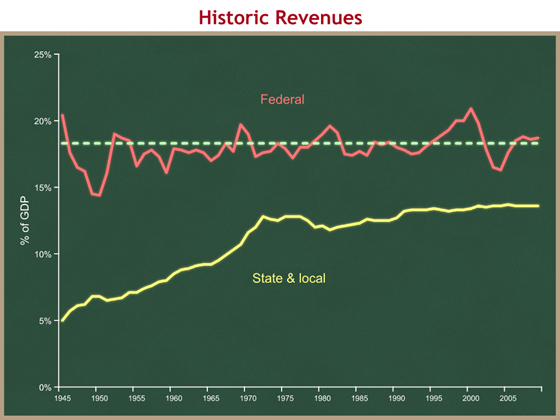 What can we learn from this graph?

For comparison, the 2001 and 2003 tax cuts combined reduced the federal government’s take from the economy by about 1.2% of GDP.

Don’t forget that, while taxes have remained basically constant as a share of the economy since the end of World War II, this does not mean that government is the same size as it was 60 years ago. Government is much bigger, because our economy is much bigger.

A flat share of the economy means that government gets bigger each year. Indeed, real revenues are more than 5% higher this year than they were in 2000, even though the share is a bit smaller.

Now let’s review recent history. This President has signed 15 laws cutting taxes. The President gets criticized for cutting taxes “too much” (whatever that means). Given this record, you would expect taxes to be low compared to historic levels. Let’s take a look. 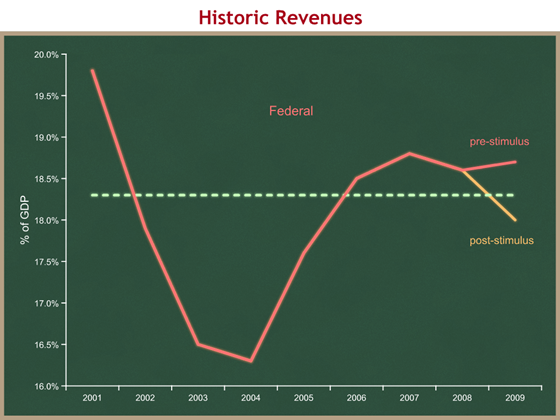 Amazing, no? Despite a tax-cutting President, taxes are now higher than the long-term historic average. Or, at least they were before the President signed the stimulus bill this past Wednesday.

Beginning in 2004 you can see the effect of the economic recovery on government revenues. Economic growth => more people working and higher wages and more wealth => revenues for the federal government grew from their low in 2004 (even with reductions in tax rates).

You can see that, before Wednesday’s new stimulus law, taxes were higher than their historic average. Now, they’re a bit lower. But there are a couple of other automatic forces in current law that push taxes up over time, and that will, as soon as next year, again push us above the historic average share of the economy. I’ll discuss those in the near future.

So if anyone suggests to you that:

Taxes are not too low. Even after 15 tax cuts, the federal government is taking the same share of the economy as it has since the end of World War II. And taxes are scheduled to go up in the near future.