This past weekend the President signed a short-term extension of a program that finances health insurance for children, called SCHIP: the State Children’s Health Insurance Program. We expect the Congress today will send the President H.R. 976, a bill that reauthorizes SCHIP for five years. The President has said he will veto this bill, and we expect the House will attempt to override the veto.

This debate is generating much heat and little light. Our critics claim that, because he opposes this bill, the President doesn’t want to help poor kids.

That is of course untrue, so let’s look at where we agree with this bill, where we disagree, and what we would do differently.

Here’s where we agree. 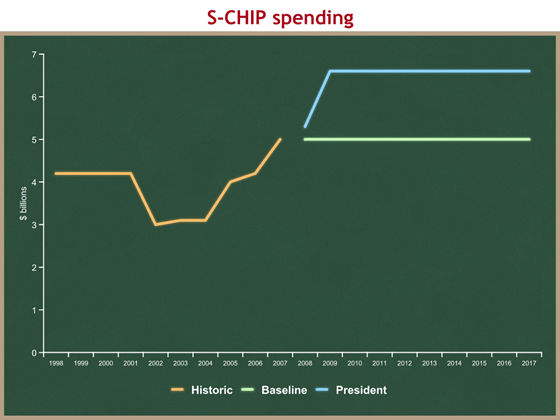 Here’s where we disagree.

This is a fundamental philosophical difference – should we collect more taxes to subsidize those in the middle class, or fewer taxes and subsidize only the poor? The President wants to focus Federal tax dollars on helping kids in families with incomes below twice the poverty line. Note that in the current debate, they count as “poor” kids.

We created a lot of heat by sending a letter from the head of the SCHIP program, Dennis Smith, to State Medicaid Directors. Basically, Dennis’ letter says to States, “You can’t expand your program to non-poor kids until you’ve demonstrated that at least 95% of poor kids in your State have coverage.” Amazingly, this simple insistence that we help poor kids first is considered controversial.

Congressional advocates for HR 976 argue that we have been misrepresenting HR 976 – they argue that the bill does not provide extra federal funding for all kids up to 400% of poverty. To be clear, it does not, nor have we claimed that it does. The bill does, however, provide extra federal funds to subsidize some kids who are not poor. Under HR 976: 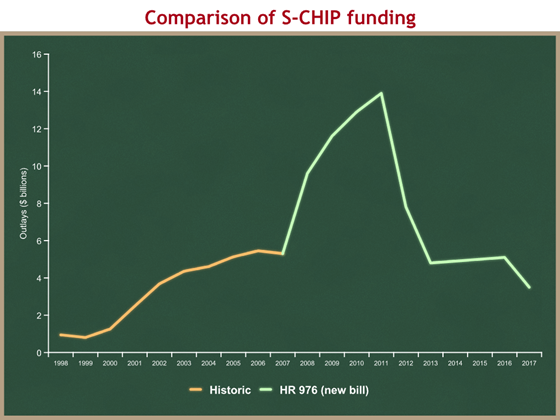 This is clearly unrealistic. Once the expectation is created among individuals and the States for $14 B / year of spending, the likelihood that the Congress would actually allow a 65% funding cut is near zero. In reality, the actual projected spending probably looks like this. 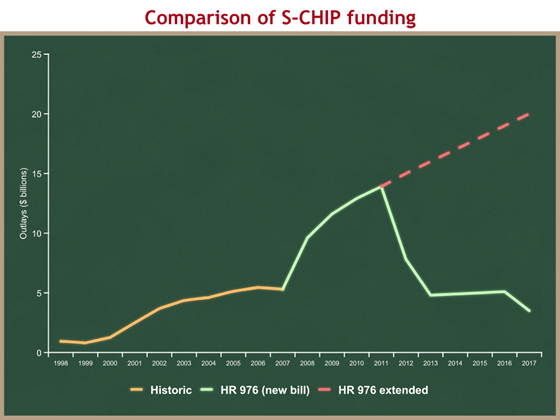 The bill doesn’t pay for this increased spending in the “out years,” because technically it assumes the big cut after 2012. So it raises taxes by “only” $73 B over ten years, when a more realistic long-term spending assumption would require even higher taxes to offset the increased spending. (Astute observers will notice that the historic spending on these two graphs is different from the first graph. That’s the difference between when money is allocated to the States, and when cash actually is spent on health insurance. In the budgeting world, the first is called budget authority, and the second outlays.)

In contrast, the President has worked with the Congress to enact changes that give patients more choices and more control over their health care (competing private Medicare drug plans, competing Medicare Advantage insurance plans, Health Savings Accounts), and he has proposed a host of other changes that move in the same direction (especially Association Health Plans, allowing people to buy insurance across state lines, and changes to the tax code, described below).

One House Democratic leader said that a Presidential veto would be a “political victory” for the Democrats. We’re looking for those who are instead more interested in finding common ground with us on a responsible policy to help poor kids get health insurance, and to making health insurance more affordable for all working Americans.