In the Rose Garden last Friday, the President proposed policy changes to address problems in the subprime mortgage market. Here are his remarks and a fact sheet. I’m going to do this in three parts: (1) give a few definitions for those who are new to the housing finance world; (2) define the problem; and (3) explain the President’s new proposals.

Let’s begin with a few definitions:

There was also a proliferation of adjustable rate mortgages, especially subprime ARMs. Much of what is happening now is driven simply by the calendar. Earlier this year, the first big chunk of subprime ARMs issued in early 2005 hit their two-year interest rate reset. Those homeowners suddenly saw their monthly mortgage payments jump. At the same time, interest rates were rising, and housing prices were depreciating in some areas (especially California, Arizona, and Florida). Nationwide, the economy outside of the housing and financial sectors is strong, but in some areas of the country (such as Michigan and Ohio) the regional economies are still slow. These factors combined to increase the number of mortgage holders who were facing financial pressure. In the extreme case, there was an increase in the number of foreclosures. You can see from this graph that resets will continue through the first quarter of 2009. Again, this is driven by the calendar. It means this problem will be with us for a while, as more homeowners will face financial pressures as the mortgages issued in 2006 and the first half of 2007 reset. Remember that when you’re still hearing about housing all next year. 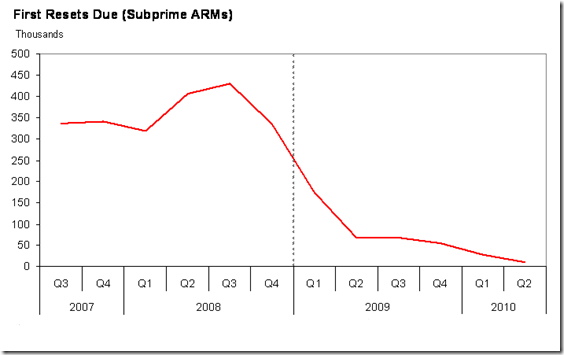 Not everyone who faces an interest rate reset loses their home. In fact, we expect more than half of them to either refinance, or just tolerate (and pay) the higher monthly payments. On TV you can now see ads for lending firms that are offering to help you refinance before your reset hits. Some will be on the margin — they can’t quite afford their mortgage, but with a little flexibility from their lender, or a little help from the government, they can stay current. The President’s new proposals fall into this category. Others bought homes they just couldn’t afford. Some of these people knew their payments would increase, and planned for it (imagine a married grad student planning to graduate before his rate resets). Others were betting that future increases in the value of the home would give them enough equity to refinance when their reset hit. Still others didn’t know, or were bamboozled by whoever sold them the loan. For whatever reason, some of these people still have no equity in the home, and they simply can’t afford the higher monthly payments. These are the subprime borrowers most likely to face foreclosure. Subprime mortgages, and the financial securities derived from them, are also a principal causal factor in recent problems in the financial markets. Last Friday, the President announced three new initiatives aimed at helping homeowners who are struggling to meet their mortgage payments:

In addition to the above proposals, last Friday the President discussed policy changes that will reduce the chance that these problems recur in the future. I will describe those soon.