Much ado about nothing: the House energy bill

In his State of the Union address, the President proposed an energy plan we call Twenty in Ten. The goal is to reduce U.S. gasoline usage by 20% within 10 years (by 2017). There are two main components to 20 in 10 that would reduce gasoline usage:

We’ve got other important policy proposals having to do with fuel, including proposals to increase domestic production of oil and natural gas, to increase refinery capacity, and to double the size of the Strategic Petroleum Reserve. But today I want to focus on the two quantitatively important components of 20 in 10.

We can split our thinking about energy policy into two separate buckets: (1) fuel for transportation, and (2) power (electricity). In America, they’re largely separate. Oil powers 97% of our transportation, with the rest coming from renewable fuels like ethanol and biodiesel. Our power comes from coal (50%), natural gas (20%), nuclear (20%), hydroelectric (7%), wind (0.4%), and a few other smaller sources. Because battery technology isn’t yet advanced enough to make it practical to store electricity and use it for transportation, and because oil is expensive enough that we don’t use it for power, you can think of fuel and power as largely separable policy issues.

When you hear elected officials talk about energy security or energy independence, they’re almost always talking about fuel and not power. The short version is that (1) more fuel-efficient vehicles make our economy less vulnerable to a sudden spike in the price of oil/gasoline, and (2) the more ability drivers have to rapidly substitute other fuels for gasoline, the more flexibility we have, and our energy security is increased.

If the President’s 20 in 10 policy were enacted as he proposed it, the expanded Alternative Fuel Standard would reduce our gasoline usage by 15% in 2017. The proposed CAFE reform would save up to 5% more, for a total of 20%. Although you won’t read it much in the popular press, our proposal is more aggressive than any other major proposal out there.

The Senate passed an energy bill in June that contains these two components, but in different forms. While we have big problems with some of the ways these two policies are implemented in the Senate-passed bill, at least the bill tries to move in the right direction.

Later this week the House will take up two energy bills with much ado. To quote Speaker Pelosi’s website:

Energy independence is a national security issue, an economic issue, and an environmental issue. With gasoline prices at record levels, Americans are feeling the pain at the pump. They worry about the security of our nation and our growing dependence on foreign oil. Fortunately, the answer to this long-term challenge is right here at home.

The New Direction Congress has undertaken an ambitious legislative agenda to lead us on a path to energy independence, strengthen national security, grow our economy and create new jobs, lower energy prices, and begin to address global warming. During the week of July 30th, the House will consider the New Direction for Energy Independence, National Security, and Consumer Protection Act, H.R. 3220. This legislation invests in new energy technologies and innovation to create new jobs; improves energy efficiency for a wide range of products, lighting and buildings to reduce energy costs to consumers; makes the federal government a leader in reducing energy usage and greenhouse gas emissions; and strengthens research and diplomatic efforts on climate change to protect our planet.

You will notice that nowhere in this statement do you see anything about H.R. 3320 reducing gasoline usage. Unfortunately, differences among the House majority have meant that their bills do nothing to reduce our gasoline usage. Zippo.

On the following graph, higher is better: more gasoline savings means our economy is less vulnerable to oil and gasoline supply shocks. 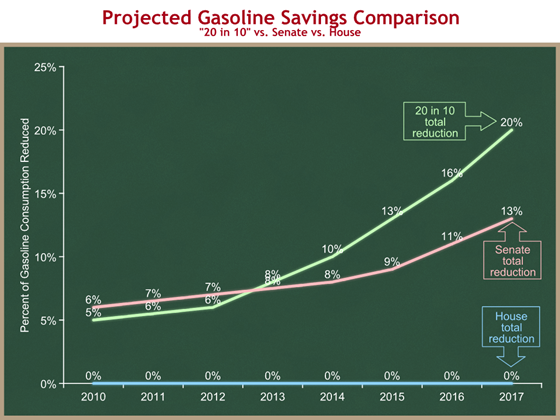 As you can see:

So what is in the House bills?

We think almost all of the House bills’ provisions are unnecessary, duplicative, or a hindrance to existing authority, or they move energy policy in the wrong direction. We understand that others might disagree.

Two facts are, however, indisputable:

When you’re filling up your tank, remember: