This is the third of three posts on how the Massachusetts special election interacts with health care reform:

After a lot of feedback and hard thinking, I conclude that this is extremely difficult to predict. Here are the subjective judgments I’m making:

If you care a lot about this and think my subjective judgments are crazy, then I will help you build your own decision tree. This is called Bayesian analysis. It sounds difficult but it’s not. I will walk you through it, step by step.

You can click on any diagram for a larger view.

Step 1: What is your projection for the Massachusetts Senate race? You can use polling data, expert analysis, or look at what the market is predicting. I played it safe and called the race a toss-up. 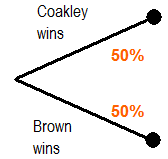 Step 2: I think there’s a difference in the legislative impact of a big Coakley win and a narrow Coakley win. I set the breakpoint at +5. Choose your own breakpoint and set probabilities. Assuming Ms. Coakley wins, what is the chance of a big win vs. a narrow win? I have no idea, so I again chose a 50/50 split.

Step 4: Assume Ms. Coakley wins a narrow victory. What is the chance of a signed law? It’s lower than under a narrow victory, but how much lower? Leader Reid still has 60 votes, but do nervous Democratic Members bolt because they’re scared of losing reelection? I think a narrow Coakley victory has a fairly big effect, so I drop 98/2 to 90/10.

Step 5: This is the hard one. Assume a Brown victory. What path do the Democratic leaders choose, and how likely is collapse? You can review my analysis and the procedural options. The probabilities you assign to these five branches must add up to 100%. Here are my predictions.

Color results that end in a law in green, and those that do not in red. The result probabilities should add up to 100%. (Click the diagram for a larger view.) 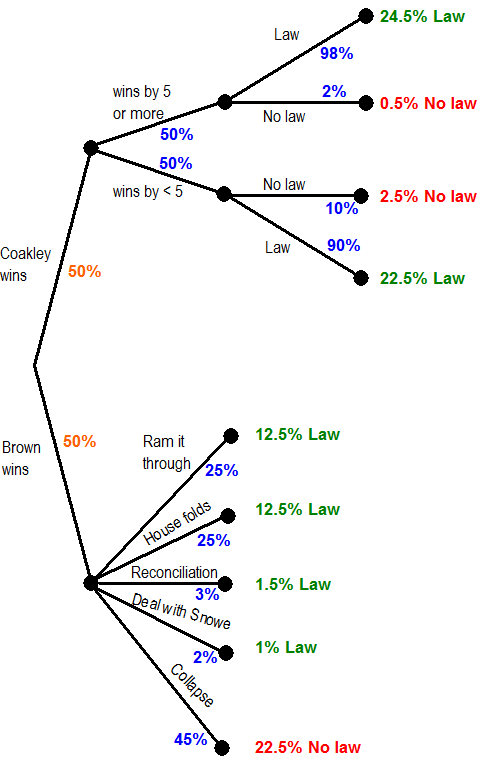 I rounded this to get my 75% pre-election prediction of a law.

Step 8: You already know your “Coakley big win” and “Coakley narrow win” probabilities from steps 3 & 4. Calculate your “Brown victory scenario” probabilities like this:

My results if Brown wins are: